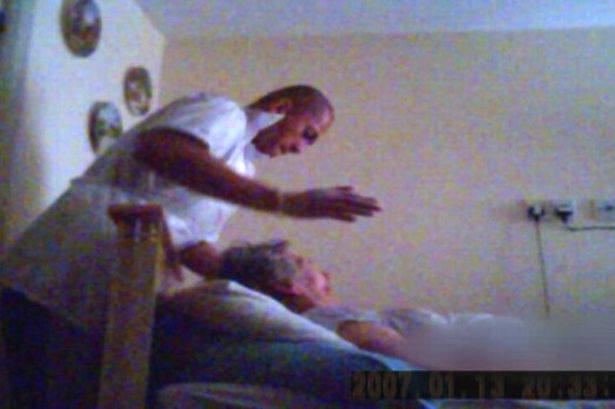 Care at the hands of the state

SPECIAL REPORT by CHRIS EVERARD: Second in line to the VATICAN for the most

accounts of the old people in their care handed over to them, the elderly inmates

are beaten-up and sent to an early death, or some ‘accident’ is staged.

The CARE HOME INDUSTRY works like this: A big house is converted with toilets

that have handles low-down, and fire exits. Rooms are divided into bed-sits. Then,

that they will not be able to stay in a NHS hospital but, because they have some

savings, they will have to pay circa £2,500 per week from their savings to live in

one of these 10-foot by 12-foot bed-sits. Of course the snatched children aren’t

charged anything – they are prostituted to local governors, councillors, policemen

when he was just a child. In October 2012, he told the BBC Newsnight TV show

that visited the children’s home in North Wales where he was incarcerated, having

these children in a posh car? BBC Newsnight described the pedo as ‘a shadowy

figure of high public standing’, but failed to name him.

Mr Messham, who made his allegations to the North Wales Child Abuse Tribunal

was ignored, Mr Meesham said ‘various things would happen’ at the hands of a

senior Tory politician and he was ‘basically raped’. Mr Meesham was one of

by the Waterhouse Inquiry Report in 2000, TWELVE YEARS AGO. When Newsnight

millionaire Kids-TV presenters, the Public began to ask for – at last – a proper

tortured, beaten and raped by men (and some women) which usually have some

kind of link to either the Conservative/Tory Party, the local council or

November. Dragging its heels, this investigation is FORTY YEARS OVERDUE. So far,

the Pallial probe, supported by the Serious and Organised Crime Agency (SOCA –

Ebay), has resulted in just ONE arrest made over the allegations centring on North

had abused him. Mr Meesham was interviewed on the BBC’s Newsnight programme

Politician from the time was one of his abusers…”. Newsnight is, of course, the

hospitals and care homes by Jimmy Savile. Lord McAlpine is one of the senior

uphold his claim that the allegations against him were a case of, ahem, ‘mistaken

So far, then, just ONE MAN has been arrested in the Operation Pallial probe. He was

taken into custody in Ipswich, and has been released on bail after being accused of

“a number of serious sexual offences against a number of individuals”. Former

Wrexham care home Bryn Estyn between 1977 and 1978, wants culprits who have

Mr Gregory, 51, from Wrexham, who has suffered with depression all his adult life

and struggled to hold down a job, said: “People are still walking free that should

have been jailed years ago.” Mr Gregory, who says he was sectioned for several

months when the abused scandal re-emerged late last year, added: “Nobody has

ever admitted any liability. We’ve been told it was a farce and we were telling lies

because we were all after making a bit of money.” Mr Gregory’s, brother Keith, 55,

a Wrexham councillor, has said he was also abused during his time in the care

system in the early 1970s. The abusers and their friends are nearly all Freemasons

in positions of power.

Inquiry, which published its report Lost in Care in 2000, found. In line with its

remit, this £13m inquiry focused on abuse in care homes in the former North Wales

counties of Clwyd and Gwynedd. The report dealt with more than 650 cases of

child abuse in 40 care homes over a 20-year period. Funny how there has only

of where these Freemasons operate!

STILL RESIDENT – an average six bedroom house, once divided into bed-sits and a

solid income paid by local councillors, will increase in value from, say, £856,000 to

sent to the Care Home each week for the up-keep of the snatched children.

office which paid these subsidies in the first place. The ownership of several Care

Homes has been traced to Aristocrats in Gloucestershire. Two homes are owned by

officers of the Serious Fraud Squad, one is owned by a Member of Parliament. The

2 Responses to “The word ‘care’ in the hands of government means total abuse.”