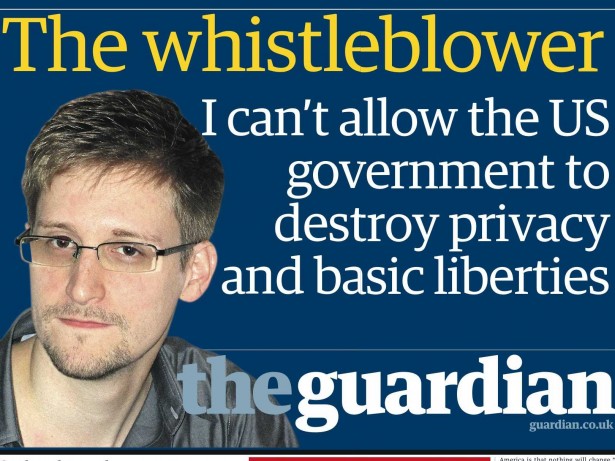 June 10, 2013
www.nomorefakenews.com
First, I’m not doubting the documents Ed Snowden has brought forward. I’m not doubting the illegal reach of the NSA in spying on Americans and the world.
But as to how this recent revelation happened, and whether Ed Snowden’s history holds up…I have questions.
Could Snowden have been given extraordinary access to classified info as part of a larger scheme? Could he be a) an honest man and yet b) a guy who was set up to do what he’s doing now?
If b) is true, then Snowden fits the bill perfectly. He wants to do what he’s doing. He isn’t lying about that. He means what he says.
Okay. Let’s look at his history as reported by The Guardian.
In 2003, at age 19, without a high school diploma, Snowden enlists in the Army. He begins a training program to join the Special Forces. The sequence here is fuzzy. At what point after enlistment can a new soldier start this training program? Does he need to demonstrate some exceptional ability before Special Forces puts him in that program?
Snowden breaks both legs in a training exercise. He’s discharged from the Army. Is that automatic? How about healing and then resuming Army service? Just asking.
If he was accepted in the Special Forces training program because he had special computer skills, then why discharge him simply because he broke both legs?
Circa 2003 (?), Snowden gets a job as a security guard for an NSA facility at the University of Maryland. He specifically wanted to work for NSA? It was just a generic job opening he found out about?
Also in 2003 (?), Snowden shifts jobs. He’s now in the CIA, in IT. He has no high school diploma. He’s a young computer genius?
In 2007, Snowden is sent to Geneva. He’s only 23 years old. The CIA gives him diplomatic cover there. He’s put in charge of maintaining computer-network security. Major job. Obviously, he has access to a very wide range of classified documents. Sound a little odd? Again, just asking. He’s just a kid. Maybe he has his GED by now. Otherwise, he still doesn’t have a high school diploma.
Snowden says that during this period, in Geneva, one of the incidents that really sours him on the CIA is the “turning of a Swiss banker.” One night, CIA guys get a banker drunk, encourage him to drive home, the banker gets busted, the CIA guys help him out, then with that bond formed, they eventually get the banker to reveal deep banking secrets to the Agency.
Snowden is this naïve? He doesn’t know by now that the CIA does this sort of thing all the time? He’s shocked? He “didn’t sign up for this?”
In 2009, Snowden leaves the CIA. Why? Presumably because he’s disillusioned. It should noted here that Snowden claimed he could do very heavy damage to the entire US intelligence community in 2008, but decided to wait because he thought Obama, just coming into the presidency, might make good changes.
After two years with the CIA in Geneva, Snowden really had the capability to take down the whole US intelligence network, or a major chunk of it? He had that much access to classified data?
Anyway, in 2009, Snowden leaves the CIA and goes to work for a private defense contractor. Apparently, by this time, he knows all about the phony US war in Iraq, and yet he chooses to work for a sector that relentlessly promotes such wars. Go figure.
This defense contractor (unnamed) assigns him to work at an NSA facility in Japan. Surely, Snowden understands what the NSA is. He knows it’s a key part of the whole military-intelligence network, the network he opposes.
But he takes the job anyway. Perhaps he’s doing it so he can obtain further access to classified data, in advance of blowing a big whistle. Perhaps.
Snowden goes on to work for two private defense contractors, Dell and Booze Allen Hamilton. In this latter job, Snowden is again assigned to work at the NSA.
He’s an outsider, but he claims to have so much sensitive NSA data that he can take down the whole US intelligence network in a single day. Hmm.
These are red flags. They raise questions. Serious ones.
https://jonrappoport.wordpress.com/2013/06/10/nsa-leaker-are-there-serious-cracks-in-ed-snowdens-story/
The Tap Blog is a collective of like-minded researchers and writers who’ve joined forces to distribute information and voice opinions avoided by the world’s media.

4 Responses to “NSA leaker: are there serious cracks in Ed Snowden’s story?”