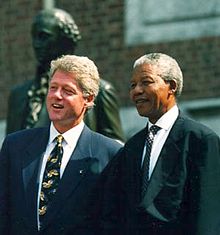 COMMENT below –  Please note, as per your last sentence of your post, Mandela is/was not a humanitarian. He was a cold-blooded murderer who was supposed to be hanged for this!

The man may be dead, but the myth lives on.  The media does not concern itself with realities.  Heroes can be created out of villains and used for the agenda of the elites.  Their deaths are inconvenient facts that need fitting into the mythology, and not instant reporting.

Rumor has it; Plug Pulled and Mandela Is DEAD at age of 94?

A reliable source has revealed that Nelson Mandela’s life support machine was shut down and he has died in hospital aged 94. According to the source, the iconic Mandela died last night while he was still in hospital for the recurring lung infection that left him in critical condition for several days.
Rumors have flooded the newspapers and the internet with several sources reporting his death days earlier in a cruel attempt to fool the public and to upset the many people who have respect for this great humanitarian. The loss of the great man will be felt across the world.
Earlier today one of our writers, Laura Oneale, wrote an article questioning whether or not Nelson Mandela was still alive. He had been in the hospital 19 days for a recurring lung infection. As speculation surrounding his health continued to grow with many asking whether he was still alive or if, in fact, he had died. Until recently authorities would only confirm that he was on a life support system and remained in a critical condition.
Authorities have confirmed that Nelson Mandela has been taken off his life support machine, adding fuel to the speculation that he had died. Because of this, the rumor has been spreading that Nelson Mandela died last night and that the government and his family have “kept a lid” on the news because of American Present Obama’s upcoming trip to South Africa. Obviously, the president’s visit will be overshadowed by the announcement of the Noble Prize wining Mandela.

The Noble Prize winning humanitarian Nelson Mandela had his life support shut down after he died last night aged 94 at the end of a long battle with illness that ended with his hospitalization and finally his death.

Mandela was a myth