The Mandela myth was a long time in preparation.  The former ANC terrorists spent twenty years in jail where he was trained by MI6 to assume a statesman role on his release.  How do I know?  Because a classmate of mine had the job of retraining him, who worked for MI6, getting him ready for his role in South African and world political theatre, now nearly over.

The classmate was recruited out of school by the history master, who was an MI5/6 recruiter.  He hand-picked boys from his history students to work for MI5, and the trainer of Mandela was one he recommended.  Top stream, not the brightest in the bunch, and a chip on his shoulder.  Ideal material to do whatever he was bid to acquire status.  Creating media myths doesn’t take a genius, just someone who can follow the foreign office handy elder statesman instruction guide, enjoys the feeling of being a cut above the others, and talks with an unnecessarily posh accent.  Traitors were always so.  The history teacher knew how to spot one.

It was interesting to listen to Michael Tellinger on the hidden history of South Africa, going back hundreds of thousands of years.  Why did the history teacher never mention such things at school?  Even now the media will never touch the real history of mankind.  We only get a load of drivel imagined by the MI5/MI6 myth departments, like most of our news.  Don’t be taken in. 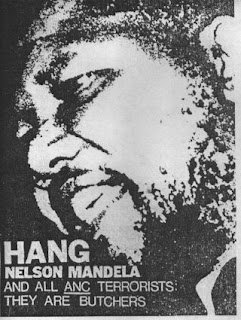 An earlier media impression before the senior statesman was created

Such claims show ‘a contempt for Africa’, says anti-apartheid leader after spy-book allegations
Nelson Mandela, the former president of South Africa, has reacted angrily to a claim that he was recruited as an “agent of influence” by British intelligence and that he visited MI6 in Britain to thank them for their help in foiling assassination attempts.
“I never visited the headquarters of any intelligence service,” he told the Guardian yesterday.
The allegations were made in the forthcoming book, MI6: Fifty Years of Special Operations, by Stephen Dorril, a lecturer at Huddersfield University, and they were met by strong denials earlier this week from Pretoria.
“False and nonsensical allegations against Nelson Mandela appearing in the British media and emanating from shadowy rightwing forces have been repeatedly made in a futile attempt to tarnish his image,” the government said.

British Chancellor of the Exchequer George Osborne has presented a review of public spending for 2015-16 on Wednesday with a view to cutting the deficit. While, funding for most government bodies have been slashed, MI6, MI5 and the Government Communications Headquarters (GCHQ) have received a bonus of up to $154 million.

The increase of 3.4 percent in overall funding for intelligence organizations, which already had a budget of $2.9 billion, makes them top of the UK government’s spending agenda, overtaking the health service, education and military.

13 Responses to “Mandela was a myth”