This weekend Exaro News  has published a story by me (? David Hencke) where a prominent figure has been falsely accused of indecently assaulting a teenage boy. Exceptionally in this case I had personal knowledge of the events surrounding the incident and knew enough about them to give a statement to the  Met Police Paedophile Unit. As a result of my statement and statements from others  the police cleared the person.

The full story is behind the pay wall at Exaro News (http://www.exaronews.com and http://bit.ly/11vfyOn).

Like the false accusation against Lord McAlpine, this is  another case of mistaken identity. 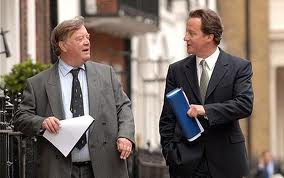 ‘The victims are all mistaken.  Our friends have told us and we believe them.’

TAP – I’m not paying a penny to Exaro News to read what is most likely a pile of useful words designed by a clever lawyer.  If anyone else wants to go behind the paywall, let us know what’s being said other than what you get in the David Hencke headline.

I rather like the drawing of parallels between Ken Clarke being accused of paedophile acts by a person claiming to be the victim (Ben Fellows), and the defence as used by Lord MacAlpine (VIZ. –  ‘It was the wrong Lord MacAlpine’).

Was it the wrong Ken Clarke MP too?  There must be hundreds of these people.

The film evidence of the abuse that took place in Ian Greer’s office, was in the possession of The Cook Report according to victim Ben Fellows.  David Cameron personally authorised the removal of the video when he was head of communications at Carlton TV.  Or maybe it was another David Cameron.  There must be dozens of those too.

Herbie Hancock has left a new comment on your post “Ken Clarke just as innocent as Lord McAlpine“:

Well I think we do need to put our thinking caps on.

1. Hencke states unambiguously a)that ‘a prominent figure has been falsely accused of indecently assaulting a teenage boy’ b) he has first hand knowledge of the case c) This IS a case of mistaken identity d) The Met took his statement seriously

2. Fellows states that a)he did not mistake Clarke’s identity because it was Ian Greer who introduced his alleged assailant to him – listen to this at Liberty Tactics podcast for 20/6/13 and b)He provided a lengthy statement to the Met who would not take it seriously.

10 Responses to “Ken Clarke just as innocent as Lord McAlpine”