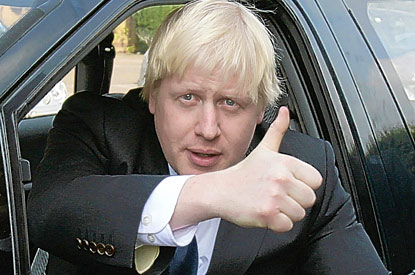 I don’t like naming names, but I’ve heard three youngish political figures present recently, all coming from the righter side of the spectrum, and all three had developed a speaking style which, listening with your eyes shut, could have been Boris Johnson.

The political ideas that circulate in Westminster seem to be developed in much the same way – by running them through the copying machine.

I heard Owen Paterson again recently.  He is not one of the above in terms of speech and definitely has his own speaking style,  though sadly he does seem to be have been heavily sat on by Monsanto.  While the media runs endless stories about the badger cull, a topic they’ve realised stirs the masses, they avoid the real story of the times – the human cull.

GM foods are a prime weapon in the arsenal of the elites who want our numbers thinned, chemtrails (a topic Owen does not feel he has enough evidence of to discuss publicly), fluoride and other poisons in processed foods and water, vaccines that sterilise millions, cripple and kill, medications that kill.  All these should be worrying us humans far more than the best way to eradicate TB  in cattle.

Owen’s appeal to his voters runs more around traditional topics like the economy, and what Labour would do if re-elected.  Conservatives, it appears, won’t do anything to save us from the globalists and their corporations as they plan and carry out assaults on our lives and our physical wellbeing.  If we consent to be culled without whispering a murmur of complaint, these young right-wingers will do no more than assure us that, under a Conservative government, debt will be held fractionally lower.  More people will be able to find jobs, were these people still to be alive, and well enough to work.

There is a hardly a mention of up and coming competitor parties, and certainly no mention of anything to do with the poisons we are being required to consume on an increasing basis, as agreed by Britain when we signed into Agenda 21 of the United Nations.  It would almost be impolite to mention such things as NATO’s Operation Cloverleaf, which sprays the sky above our heads every day and removes the sunlight, depriving people of the vital Vitamin D which cures most illnesses and is vital for health.  As for child abuse, the Bilderberg meeting at Watford, or the terror hoax at Woolwich….not on the agenda, period.

Politicians are there to serve the powerful, and we are expected to fall into line as we always did.  All seems to be fine in fact.  Laughter and cheers can be heard in their audiences, as long as their voices sound as close to a Boris Johnson as it is possible to make them.

The other evening, just a few looks of bewilderment appearing on faces around the room told a different story.  Are things really as OK as this, they seemed to be saying? Wars are not mentioned.  Nor central bankers.   Subjects like that are impolite and not funny at all.

With nearly all the major issues brushed under the carpet, it is not surprising that more and more people are moving away from their traditional parties, more in despair than hope.  It’s not as if Nigel Farage mentions the depopulation agenda either, although Gerard Batten did attend the Bilderberg fringe and spoke.

Even the good Conservative politicians, who work hard on serious issues and sometimes win, seem unable to talk the language of the voters.  The chasm between them is becoming too vast.   Sounding like a Boris and pretending that all is fine bar the economy, is the only game that’s left.  As with nearly every other aspect of life, now with politics too, style is taking over from content.  The best they could offer on Cameron was that he’s actually more right wing than people think he is.  It would have seemed impolite to suggest otherwise.

One Response to “The young politicos who wannabe Boris Johnson clones”