The recent passage of Amendment 64 in Colorado, which legalizes the cultivation and recreational use of marijuana throughout the state, is having a major impact on the state’s agricultural sector. But the biggest potential for economic growth may actually come from marijuana’s non-psychoactive cousin hemp, which is right now being planted on U.S. soil for the first time in 60 years, thanks to the initiative’s passage.

According to reports, a 60-acre plot of land in the southeastern corner of Colorado will be brimming with hemp plants. It will be the first time that hemp has been grown commercially on American soil in more than 60 years, and many more plots of land throughout the Rocky Mountain state are expected to follow suit, as the latest figures estimate that the hemp industry will outpace the marijuana industry by a factor of 10 or more.

“I believe this is really going to revitalize and strengthen farm communities,” says Ryan Loflin, the man who intends to plant America’s first hemp crop on his 60 acres of arable land, which formerly supported alfalfa.

Hemp is not marijuana, and there is no legitimate reason for its continued prohibition by the Feds 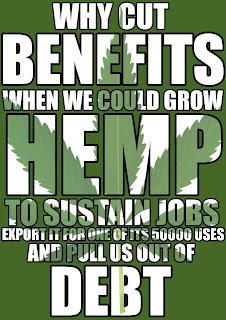 Many Americans are still unaware that there is even a difference between hemp and marijuana, both of which are prohibited by the federal government from being cultivated on U.S. soil. But unlike marijuana, hemp contains little-to-no THC (tetrahydrocannabinol), the psychoactive component of marijuana that gets people “high,” which means that hemp cannot be smoked, and thus cannot be not used as a drug.

To the contrary, hemp is an amazingly robust industrial plant, the various components of which can be used in a variety of commercial and nutritional applications. Hemp seed oil, for instance, and hemp protein are popular, omega-3 fatty acid-rich food products consumed by millions of health-conscious individuals. Hemp fiber is also sometimes used to reinforce concrete and to fortify automobile bodies and frames. And beyond this, hemp naturally cleanses soil and water, which makes it a powerful force for good in the environment.

“Hemp is food, animal feed, fiber, fuel, shelter,” says Lynda Parker, a Colorado-based hemp supporter and founding member of a pro-hemp coalition in the Rocky Mountain state, as quoted by The Denver Post. “It cleans the air, the water, the soil. Hemp could be enormous for Colorado because we’re the first state to legalize it.”

But as previously mentioned, hemp somehow got lumped into the same category as marijuana as far as the federal government is concerned, which means Americans have been deprived for over half a century of reaping its many practical and economic benefits. Virtually all of the hemp used today in American products has to be imported from places like Canada due to legal prohibitions that block its cultivation here at home.

But all of this is changing in Colorado, where a reanimated hemp industry is quickly emerging from the dust bins of history, and reviving the economic climate of struggling rural Colorado. Similar to the current situation in many other states, many rural communities in Colorado have long suffered from a lack of healthy industry. But hemp could set the state on a whole new course toward economic prosperity that will most assuredly be the envy of the rest of the country.

“This is monumental for our industry,” says Bruce Perlowin, CEO of company known as Hemp Inc. “It will unlock a clean industrial revolution that will be good for the economy, good for jobs and good for the environment.”

To learn more about the many benefits of hemp, as well as America’s rich, but little-known, hemp history, be sure to visit:
http://hemphistory.org/
– See more at: http://www.riseearth.com/2013/06/industrial-hemp-returns-to-america.html#sthash.8taETtJp.dpuf