He knew he was under threat and made an attempt to find safety.

He knew he was under threat because he refused to keep quiet.

He refused to keep quiet about the paedophile abuse he was subjected to as a child by amongst others Ken Clarke, the ‘Justice’ secretary.

He asked the Police to act on his allegations.

They refused, saying that Ken Clarke could not be interviewed as he was too high up the chain of power in Britain.

They advised him not to talk about what he had suffered, and to keep off the internet. 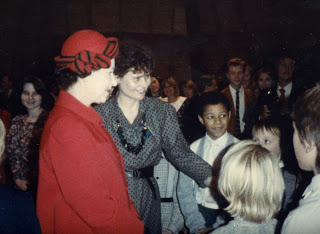 Ben Fellows – former child actor, meeting The Queen (white tie and shirt).  Recently has made serious allegations against Ken Clarke, the Justice Secretary, for abusing him by groping his genitals above his trousers in the House of Commons.

Ben replied by releasing the recording he had made of his extensive interview with the Police in his home on Youtube, and appearing on UK Column TV repeating the allegations he has always made against Ken Clarke.  He gave his permission for these videos to be distributed by The Tap Blog amongst others.

Now he has disappeared, in the week that Ken Clarke is hosting the Bilderberg Group at Watford in England, just north of London.  It is pretty obvious that he would have knowledge of Ben’s disappearance, and could well have demanded that he be removed from circulation.

Formerly in command of MI5 (as Home Secretary), a senior member of the Bilderberg Group.  He gave Jimmy Savile permission to reside in hospitals and mental institutions where he had easy access to child victims, from where he could procure.  After getting away with who knows what for so long, Clarke is not in a mood to be interviewed by the Police.  The Police are too frightened to ask him questions about the allegations he faces.

This is Britain’s Justice Minister, so powerful that he can command the Police to ignore the law, and then act above and beyond it.  He has issued D Notices and is now removing witnesses.  Earlier David Cameron was involved in destroying evidence.

I have a message to send to the ‘Justice’ Minister, Ken Clarke.  It is very simple, and it needs to echo across the land, at the Bilderberg demonstrations, in football stadiums, outside Parliament, everywhere and anywhere that British people wish to make a statement that theirs is a land where the law cannot be supervised by a criminal who refuses to be interviewed by the Police, and face charges. Ben and wife Julia have been together nineteen years

The chant from hereon, addressed to Ken Clarke, is just three words –