Michael Tellinger, author, scientist, explorer, has become a real-life Indiana Jones, making groundbreaking discoveries about ancient vanished civilizations at the southern tip of Africa. His continued efforts and analytical scientific approach have produced stunning new evidence that will force us to rethink our origins and rewrite our history books…………….
Michael Tellinger has become an international authority on the origins of humankind and the vanished civilizations of southern Africa. Scholars have told us that the first civilization on Earth emerged in a land called Sumer some 6000 years ago. New archaeological and scientific discoveries made by Michael Tellinger, Johan Heine and a team of leading scientists, show that the Sumerians and even the Egyptians inherited all their knowledge from an earlier civilization that lived at the southern tip of Africa more than 200,000 years ago… mining gold…  www.zuluplanet.com

Annunaki cities are being discovered in Africa.
Parallel earths and portals between them are being revealed.
The Illuminati are allowing more of the truth to be revealed, as they feel their power structure is complete, and there is no escape possible for the masses.

Michael Tellinger has an interesting story to tell.
He’s had a very varied past, as an actor, in advertising, in pharmaceuticals before he started researching the real history of the world.

He says –
The education system and the social structures have been very carefully planned to stop people thinking for themselves.  He ended up writing a book – Slave Species Of God – which tells the annunaki story.
He sees them as gods with a small g, not the main God with a big G who created the universe.

Gods with a small ‘g’ genetically engineered the human species, and they still try to control us.

We need to know why we’re here to be able to construct a plan for our future.  He was introduced to the ancient ruins of southern africa by Johan Heine.  There is a vast vanished civilisation, the largest human structures ever created throughout history.  They link to Enki, and the annunaki gold-mining efforts, as mentioned by Zechariah Sitchin in his Earth Chronicles.

The ruins are highly complex.  They were 275,000 years old before the great flood wiped them all out 13,000 years ago.  Abantu are the children of Antu – the head Annunaki God.  The Hindi language is very close to many African languages.  There are historical links to India. 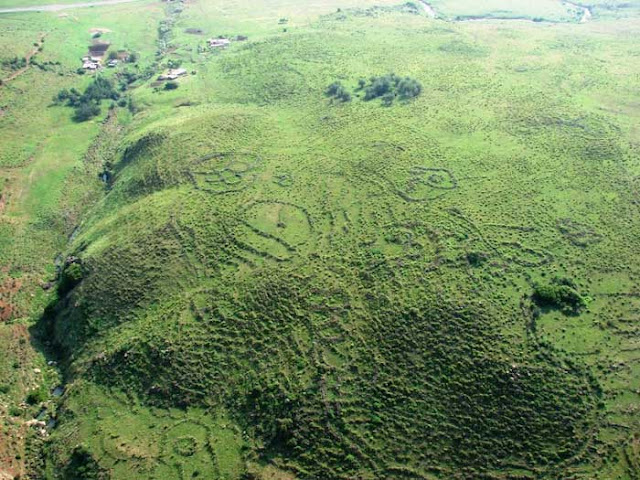 Look for Adam’s Calendar on Google.  A beautiful picture of stone circles.  There are thousands of them, but many were destroyed  by forestry workings.  The soil and sand from the flood covered everything.  13,000 years ago, after the flood, it all started again.  Adams Calendar proves the earth was tilting further over by 3.25 degrees before the flood.

Atlantis was sunk by the same geophysical event, he believes that caused the flood.  Some kind of passing planet or brown dwarf (a second sun in our solar system – a theory of Andy Lloyd) caused these geophysical events.  Andy Lloyd (a Brit) researched Nibiru and the Brown Dwarf for ten years from the scientific point of view, and ended up believing in the Annunaki.  Lloyd writes novels, based on his researches, also interviewed on Camelot.

13,000 years ago, many Africans were to be found moving to South America, where new gold veins were exposed by the floods and geo-physocal event.

Kerry Cassidy – talks about the pyramids at Giza, and a hot spot in a top chamber, and more evidence of earth tilt variation, some happening recently.  They are finding underground chambers and tunnels, assembling a picture across the planet, wherever there are pyramids.  This is the annunaki culture.  There’s something going on with all of this.

Channelling, psychic world, reincarnation and many other things are discussed.  People say to him why is all this information coming to you.  He says he saw things long before others could see things.  Psychic ability is a real ability.  Maybe in my past life I was somebody linked to these structures.  Many psychics told me I’m a reincarnation of ?Demuzi?

Kerry Cassidy – Her own story was an investigation of the Annunaki.  She tried to make a movie but no success at the time.  She wants to try again bringing together Sitchin’s work.

He mentions Velikovsky as an influence.  Von Deineken?  Then he read Sitchin.  And decided to follow up as much as he could on it.  His study of science made him able to simplify the subject for people, linking together the story with many reinforcing scientific angles.

Credo Mutwa was interviewed.  He knew what Adam’s Calendar was, and said it was being destroyed by evil people deliberately.  It was a gateway linking heaven to earth.  Now the ruins are being preserved.  Farmers are now aware of ruins they are finding all over Southern Africa, and realise university reports are wrong in their interpretations.  Farmers were told they were of little value, and they destroyed them.  Now they realise how old they are and how important they are, and preserve them.

The remains are vast.  You can’t appreciate it until you see it.  The stones have an energy and a musical element.  Built 270/280,000 years ago all from the same kind of stone.  10 million stone ruins from a population of 50 million people that lived here 275,000 years ago.  No excavations are happening as there are no permits.  We need archaeologists willing to face a new reality.

The stones make a sound.  As they were piling them up, the stones rang like bells.  Each stone rang at a different frequency.  They are resonant chambers, each like a string in a piano – but with thousands of strings.

The energy in the stones freaked out an energy researcher.  These are energy devices.  These powered the whole Southern Africa gold mining operations.  These are the same devices that were used to sink Atlantis.  The energy was misused, which caused the whole continent to sink into the sea.

The Japanese created a death ray at the end of WW2.  They used a magnetron to build up the energy.  Their device looked exactly the same as the 2 metre stone energy circles.

Kerry says the pyramids at Giza have similar energy creating powers.  The sound of the water flowing under the pyramid were passed through the chambers until the sound created the energy at the top of the pyramid.

Have you had much interference?

Michael Tellinger – Yes I am getting slanderous rumours being spread about me.

Kerry –  These rumours need to be dispelled.  Some of the rumours concern Credo Mutwa.

Michael Tellinger –  Credo has released a lot of information publicly which he wasn’t meant to release, and they are taking their revenge on him.  He’s in dire straits with no money.

Kerry – You’re being accused of raising money for him, and then keeping it.  This is disinfo.

4 Responses to “Discovery of vast vanished civilisation in Southern Africa”