Hi Tap, I have heard it said on many occasions, “GOD DOESN’T USE MONEY TO PAY HIS DEBTS” is this further proof of this Statement. SO THE MIGHTY  SHALL FALL, or is this just another Diversionary Tactic, designed to take your Eyes Off Of The Ball, whilst they try to Slip More Stuff Under The Wire?

There are loads of links  on this, here are The Google Links Tony Blair strongly denies affair with Wendi Deng
The Main Link I have sent was pulled out of a Scouring Meta Search Engine, that Drags Everything up, & unless you have a Fast PC, the Screen Freezes, & can cause problems, which is why I didn’t send tat Source.
WE Should also not forget That The Odious Blair, Is a PAPAL KNIGHT, yet another one of Those SMOMS, The Common Denominator, linking High Ranked Askanazi Zionist Jews, & The VATICAN. Remember what I Told You. SMOMS ARE THE VATICAN’S, AGENTS IN THE FIELD BLAIR IS A JESUIT also see
The Rothschild dynasty Guardians of the Vatican Treasury a link I have previously given, some time back 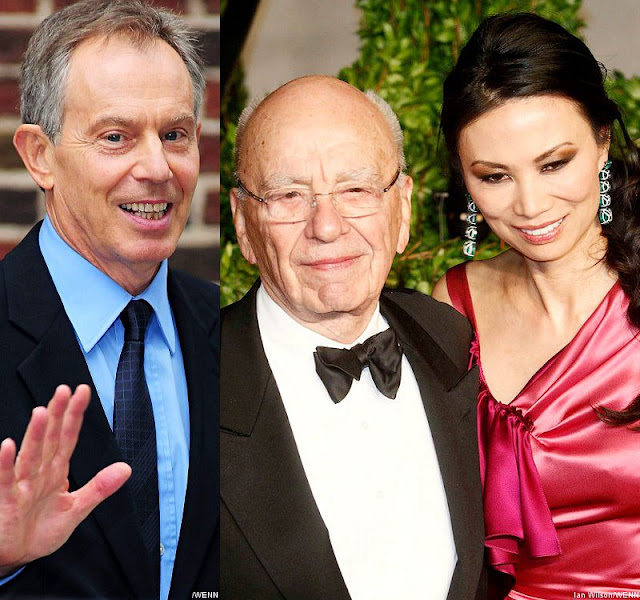 UPDATED: A rep in the former British Prime Minister’s office dismissed suspicions swirling around his friendship with the News Corp. mogul’s wife.

Rupert Murdoch and Wendi Deng: 4 Things to Know About Their Daughters

BRINGING THE UNEXPECTED TO YOUR ATTENTION.
REGARDS ……..  WASP
When contacted by The Hollywood Reporter, the rep said: “If you are asking if they are having an affair, the answer is no.” UPDATE: It has since been made clear toTHR by Blair’s rep that there has never been an affair.
PHOTOS: Rupert Murdoch and Wendi Deng Through the Years

TAP – What we hear of Blair’s interest in young memebers of his own sex makes the suggestion of affairs with powerful women, a recurring theme, seem very unlikely.  It’s good cover for him to be associated with such stories.