You may not remember me but you groped me in Ian Greers office back in 1994, while I was working for the Cook Report.
Unfortunately, I’m reluctant to give you a chance to sexually assault me again for you to ascertain my identity, so you’re just going to have to take my word for it. If you remember you said that you were in Greers office so often that “Ian should put a parliamentary bell in his office so you’d know when to go and vote.” How we all laughed! Of course this is I understand a breech of parliamentary rules.
I have made a serious allegation against you concerning the sexual assault on me to  “Operation Fairbridge” which is part of the Metropolitan Police’s Paedophile Unit, as you at the time believed that I was fifteen years old. I actually wasn’t that interested in making a statement as you hadn’t sued me over my story. It was the Police’s idea not mine so perhaps you should take it up with them.
DCI Paul Settle who is in charge of the investigation informed me that if I were to make a half page statement they wouldn’t do anything. However, I was interrogated for eight hours and the statement was fifteen pages long. The Detective who took my statement said that it was detailed and of course she was anxious to get off as she had plans to have drinks with her Sargent. As former Justice Minister you will appreciate that surely nobody is or should consider themselves “Above the law”, so why are the Metropolitan Police claiming that you are?
If someone made serious allegations against me the Police would question me and take a statement at the very least. I’m assuming the Criminal Prosecution Service would then see if the evidence would find its way to a criminal court or not. Of course as a barrister you know more than I do. The Police, in the form of a Detective Ben Lambskin stated officially that even if they were to speak to you, you would be likely to lie.  Not being a lawyer I’d have to say after speaking with a few legal professionals that you probably have a pretty good case against the Metropolitan Police for slandering your right honourable name. Do the Police often say that Ministers are likely to lie?  You can find the video’s with the Police on YouTube as an investigative Journalist I taped them. Isn’t YouTube great! Lol

Of course you or your people, when I first wrote the article used public money to get the Cabinet Office to threaten fellow journalists and bloggers which were running my article. Is that proper? I don’t think so. In any case it didn’t work did it.
The Paedophile unit told me, that what was happening to me was a “demoralisation exercise”whereby if a victim of abuse makes a statement against a someone, suspected of being an abuser or Paedophile and are either not believed or the Police “dismiss” them, then they never complain again. Perhaps as the former Justice Minister you will be able to inform the Police that their strategy at least in my case has failed. 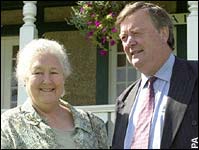 Mr & Mrs Ken Clarke – so powerful that the Police refuse to even interview them about alleged abuse.  David Cameron had the photographic evidence of the abuse incident with young Ben destroyed.
So after my speech at this years Bilderberg fringe, introduced by Bill Maloney of Pie and Mash films, I have been keeping a low profile as the Police have been threatening me. Why? I’m a really nice person just doing my civic duty co-operating with the Police in connection with a crime.
So I complained to the IPCC and was informed by a Mr Dave Bird that the Police have reopened my case after Detective Ben Lambskin et al informed that it was closed. Which is really good news but they haven’t contacted me.
So this is what’s going to happen next as on television you were looking a little ill the other day talking about Bilderberg, so I don’t want to worry or surprise you unnecessarily. I know how old people are vulnerable to having heart attacks and strange illness suddenly in regards to child abuse and paedophilia accusations. Just take Lord Llyod Webber, I told the Police about him sticking his tongue down my throat, when I was a child. I told the Police back in October last year and suddenly he’s being suffering from a strange illness so much so that he was unable to go to Broadway to accept his Tony award for Phantom of the Opera.
Sorry I digress. I am going to be returning to London in the next few weeks doing what I am calling:

Essentially I will be walking from Plymouth to London which is around 300 miles give or take. The aim of the idea is that people can join me on the walk maybe for a mile, or longer if they want and walk for what concerns them about the corruption pervading our world. It could be the criminal banks, the government, child abuse, YOU!…you get the drift. So by the time I reach London we will have a rally of some kind and that’s were you come in. It’ll be like The Million Man March but just with me.
I would like to have a sit down conversation with you on BBC Newsnight or even better on a special BBC Question Time for you to answer publicly why you are preventing the Police from doing their job.
If I were you Mr Clarke, thank God I’m not but if I were, I’d want to make a statement to the Police and put my side of the story across. Of course the Police have said that you will probably lie which is fine. They also said that they couldn’t make people tell the truth so I guess you can play in the grey area of the law. They stated that there were protocols in place which prevented them from speaking with you. Please can you make this exception, speak to whoever it is at the Standards Committee or Speaker of the House and do the right thing and allow the Police to question you.
I was pleased to hear that as you stuttered your way so expertly through questions in the house concerning Bilderberg that you have decided to step down from the steering committee. I personally think that’s a shame as everyone will miss you

I feel that perhaps in some small way I was slightly responsible for that after appearing just a few hundred yards down the hill from you at the Grove last week. Oh by the way, I went back to the Grove at 3am on the Sunday and I saw men in what only be described as forensic science suits doing something. A Police officer an Inspector Knight told me earlier in the day that the hotel was being cleaned for DNA. Is that what always happens at these events and more importantly are we the tax payer paying for it?
Oh I just remembered this is funny. Remember when you were talking about G4S in Ian Greers office back in the day. You said that, why when you were asked why the company was called G4S, after the fiasco with Group 4 Securicor, you said that “It’s called G4S as the 4 was the dollar sign on the keyboard”…Oh so it is!

Also as you are probably aware that Prime Minister David Cameron whilst working for Carlton Television was responsible for getting the Cook Report tapes on behalf of the Major government at the time when Carlton Acquired Central television.  Next time you see Dave in Cabinet can you ask him what he did with them as the Police claim that there is a high level political conspiracy regarding what happened to those tapes. It would go along way in proving my case and outing all the other “Cash for Questions” scandals contained therein.
It should take me around 3 weeks to walk from Plymouth to London so we can meet at your house or in West Minister. Can you let me know if you’re up to doing the Special Question Time show as it would be great to get that going sooner rather than later. I know Mark Thompson the ex D.G of the BBC but since here’s left I don’t really know anyone at the top anymore. So if you could have a word, Greece the wheels I’d appreciate it.
Looking forward to seeing you very soon.
Of course you are invited to the Rally Against Corruption when I’m back in London, you can be my plus one. It would be great to have some music, maybe even a buffet with Pineapple on sticks and processed horse meat sausages. Perhaps the Cabinet office could help organise some nibbles and squash.
Anyway hope you’re feeling better after last week.
Yours sincerely
Ben Fellows
P.s The Paedophile Unit have witness statements against high profile movie stars. DCI Paul Settle talked about watching the Joanna Lumley Porno tapes! Perhaps we could change the law so that the Police have to act against abusers and paedophiles rather than sitting on evidence, keeping it secret and using it for their own ends. Just a thought.