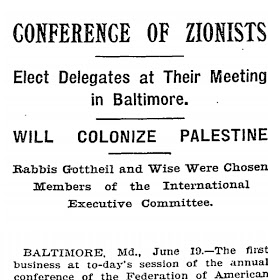 An article about a Conference of Zionists published on July 20, 1899 in the New York Times depicts how the Conference sought to “colonize Palestine” and discussed the purchasing of land with English Zionists.

World Bulletin/News Desk
An article about a Conference of Zionists published on July 20, 1899 in the New York Times expresses that the Zionists “will colonize Palestine.”
The article explains that the conference discussed a paper from the English Zionist Federation “proposing the re-establishment of Judea as an independent State, suggesting the purchase of the Maccabean sites in Palestine, and the beginning of the work by the establishment of a Jewish colony and a Jewish Agricultural College there.”
It further clarifies that “The site to be purchased comprises about fifty acres, six miles from a station on the railroad between Jappa and Jerusalem, and within sight of the sea and a large stretch of the Palestinian coast.”
It notes that English Zionists have gathered 2,500 dollars in the currency of the period and request that quantity from the American Zionists.
The article also explains that “On motion of Dr. Wise, the Federation voted $100 as the nucleus of the required fund of $2,500, the remainder to be raised by subscriptions from the 125 societies and individuals, both Jews and Gentiles. A general appeal to the public will be made.”
It also conveys that delegates will be elected at the Zionist meeting in Baltimore.

The straightforward and comfortable manner with which the colonization is pursued is indicative how, before having to be concerned with the image of Zionism and public relations, Zionist leaders depicted their movement as a colonial mission during a time in which European nations were colonial powers.

Says it all, really… the Zionists need locking up for life for all the wars and misery they’ve caused.

Of course, you won’t read anything about this in the Zionist-controlled mainstream media.

The war against Zionism