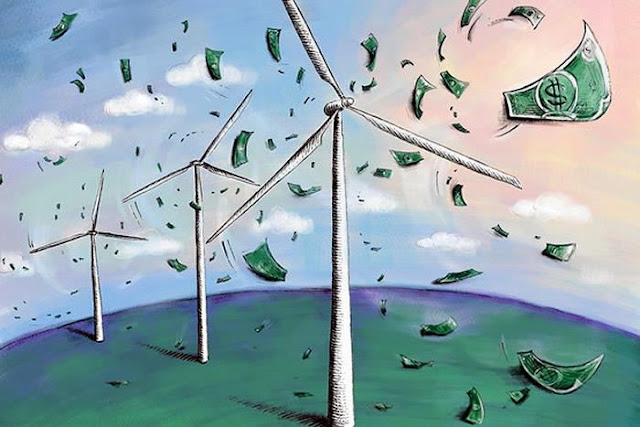 That’s not how the landowners see things.

Anonymous said…
By Simon Johnson, Scottish Political Editor10:37AM GMT 22 Feb 2013109 Comments
Struan Stevenson, a Conservative MEP, estimated the sum will be paid over the next eight years to at least a dozen landowners willing to allow turbines on their estates and farms.
He suggested the wealthiest Scots are benefiting from the spread of wind farms at the expense of consumers, who have to heavily subsidise the technology in their energy bills.
Among the landowners named in the book is the Duke of Roxburghe, who, he estimated, could earn £1.5 million a year from turbines erected in the Lammermuir Hills.
Titled So Much Wind – The Myth of Green Energy, the book also claims that the spread of wind farms is leading to a new wave of Clearances as families are forced to move away by the construction of industrial turbines.
It was published as MSPs debated Alex Salmond’s plan to generate the equivalent of all Scotland’s electricity from renewable sources by the end of the decade.

“We’re seeing in Scotland the biggest transfer of money from the poor to the rich that we’ve ever seen in our history,” he told a press conference in Edinburgh.

Anonymous said…
Interesting comment re: the clearance of people from the countryside.

Part of the plan no doubt.

“We’re seeing in Scotland the biggest transfer of money from the poor to the rich that we’ve ever seen in our history,”

This is what wind farms and global warming are all about, a wealth transfer via tax from the rich to the poor.

The previous chairman was Tim Yeo, he had to stand down because he failed to declare a vested financial interest.

He was also Minister for the Environment and Countryside under John Major. He ended up stepping down from that because of his love child and anybody old enough will remember the newspaper headlines of ‘Tim Yeo must go’.

So, the replacement is announced, John Gummer *now Lord Deben), he is about to undergo investigation for undeclared vested financial interests.

He was Secretary for the State for the environment under the Major government and introduced the Landfill Tax – another tax for transferring wealth.

He was famous for his cack handedness of handling the BSE crisis – tailing people there was nothing to worry about (which is why most of the world banned British beef) and that infamous picture of him feeding a burger to his daughter.

And lastly Dave cast iron guarantee’s father in law (SamCams’s dad) is raking in £365,000 a year in taxpayer subsidies for his wind farms and he thinks it’s so good, he’s going to build loads more.

Unfortunately the government, the media and academia have brainwashed people, so that they can’t see what a money making scam this is. I wonder if they’ll wake up, when their combined gas & elec bill rises to over £2,000 a year by the end of this decade and the smart meters that have forcibly been installed, start rationing their energy at peak times.

3 Responses to “Wind turbines summed up in a cartoon”