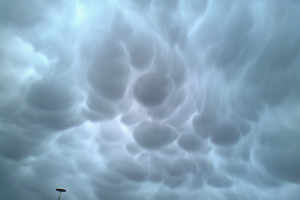 Shoppers stopped and looked skywards open-mouthed, and internet chatrooms were full of debate about the strange sight.
Today weathermen say the bubbles, seen in Telford on Saturday evening, were rare mammatus clouds, lobe-like clusters packed full of ice and rain that appear when thunderstorms are in the air.
This image was taken by Shropshire Star reader Bob Owen, shortly before a sharp shower.
He said: “It was only like it for two to three minutes and I just had to get a picture.”
Another reader, Phil Spencer, said shoppers at the new Morrisons store in Lawley were stopped in their tracks
“Everyone was looking up and saying how odd it was,” he said.
TAP – I watch chemtrails being laid in the distance over Telford most days.  This time they overdid the mix.  Or is it HAARP?
See how they control weather from this link sent into comments below.
Julia said…
I do a lot of sky watching, but I haven’t seen a formation quite like this one. Yet.
I have noticed more and more people getting fed up, and almost questioning the weather, as if it isn’t quite right somehow. People are more willing than they used to be, to believe there is trickery and political control going on.
The Tap Blog is a collective of like-minded researchers and writers who’ve joined forces to distribute information and voice opinions avoided by the world’s media.

8 Responses to “Weird clouds over Telford, Shropshire. Nothing to do with chemtrails of course.”