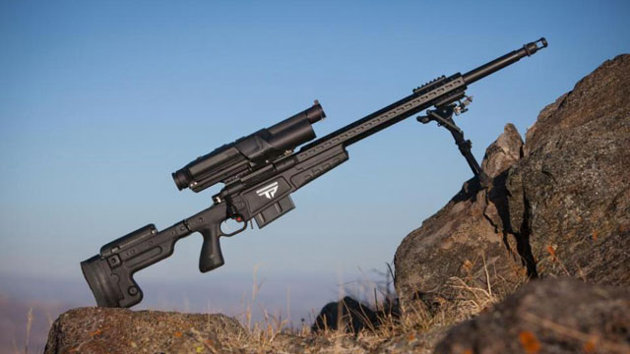 Shipping out to customers this week

A New ‘Smart Rifle’ Decides When To Shoot And Rarely Misses

A new rifle goes on sale on Wednesday, and it’s not like any other. It uses lasers and computers to make shooters very accurate. A startup gun company in Texas developed the rifle, which is so effective that some in the shooting community say it should not be sold to the public.
It’s called the TrackingPoint rifle. On a firing range just outside Austin in the city of Liberty Hill, a novice shooter holds one and takes aim at a target 500 yards away. Normally it takes years of practice to hit something at that distance. But this shooter nails it on the first try.
The rifle’s scope features a sophisticated . The shooter locks a laser on the target by pushing a small button by the trigger. It’s like a video game. But here’s where it’s different: You pull the trigger but the gun decides when to shoot. It fires only when the weapon has been pointed in exactly the right place, taking into account dozens of variables, including wind, shake and distance to the target.
The rifle has a built-in laser range finder, a ballistics computer and a Wi-Fi transmitter to stream live video and audio to a nearby iPad. Every shot is recorded so it can be replayed, or posted to YouTube or Facebook.
http://www.npr.org/blogs/alltechconsidered/2013/05/15/184223110/new-rifle-on-sale
The Tap Blog is a collective of like-minded researchers and writers who’ve joined forces to distribute information and voice opinions avoided by the world’s media.

3 Responses to “The rifle that can’t miss”