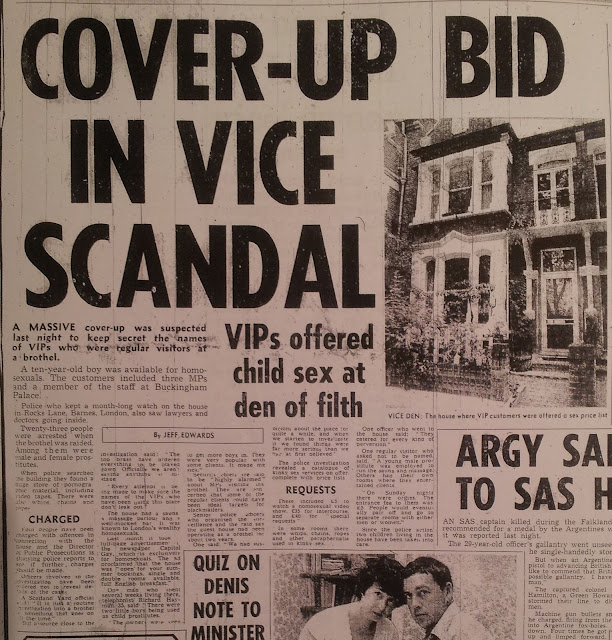 The Elm Guest House story broke on 7th August 1982, when the Daily Express reported that “at least three MPs, a member of staff at Buckingham Palace, and leading lawyers, doctors and City businessmen” were questioned as part of inquires relating to “a vice ring” in “a brothel in a smart London suburb”.

Over the next 10 days more lurid allegations emerged in almost every national newspaper. A police raid on the guest house in Rocks Lane, Barnes, involving ‘up to 60 officers’ found ‘a huge store of pornographic material including video tapes’. ‘There were also whips, chains and ropes’. ‘There were two little boys being used as child prostitutes’. It was also revealed that Scotland Yard detectives were investigating the disappearance/murder of eight-year old Vishal Mehrotra and fifteen-year old Martin Allen in connection with the guest house.
These links are all the national news reports that I have found for those ten days about the Elm Guest House paedophile ring:
Daily Express (7.8.82)
News of the World (8.8.82)
Sunday Times (8.8.82)
Daily Express (9.8.82)
Daily Mail (9.8.82)
Daily Star (a) (9.8.82)
Daily Star (b) (9.8.82)
The Guardian (9.8.82)
The Sun (9.8.82)
The Times (9.8.82)
Daily Express (10.8.82)
Daily Star (10.8.82)
Daily Express (16.8.82)
After those initial 10 days of reporting there was nothing more in the papers. The reason for this silence is revealed in an article which appeared in Capital Gay magazine from August 1982.
Libel threats were used to silence the newspapers from reporting on the VIP paedophile ring. The Attorney General, Sir Michael Havers, personally investigated complaints from lawyers representing Elm Guest House.
Sir Michael Havers played a leading role in the Sir Peter Hayman cover-up, and told Geoffrey Dickens not to name the paedophile diplomat in Parliament. Havers argued that Hayman should have retained his anonymity, and didn’t think the British public needed to know that powerful Establishment figures abused children.
http://spotlightonabuse.wordpress.com/2013/05/18/the-elm-guest-house-how-an-establishment-paedophile-network-was-covered-up-for-31-years/
The Tap Blog is a collective of like-minded researchers and writers who’ve joined forces to distribute information and voice opinions avoided by the world’s media.

2 Responses to “The Elm Guest House: How an Establishment paedophile network was covered up for 31 years”