Road_Hog said…
Yep, this is a move that the NuLabour were aiming for as well, a cashless society and as stated in the article, it is all about control.

I wrote about it four years ago, there is an interesting link at the bottom of the blog post that is worth reading.

http://road-hog.blogspot.co.uk/2009/10/id-cards.html
NuLabour introduced the photocard driving licence. This was mere a pre-cursor to ID cards, to get people used to carrying a photo ID card around with them.

Think about it, when have you ever needed your photocard driving licence for official reasons. I don’t mean that it is handy if in the past you wanted to join a video club and you just handed them that and it made life easier for you, when did you need it officially to show the police or some other government agency – I’ll answer that, never, it’s handy if you want to hire a car, but that isn’t the reason we carry one.

The quote often trotted out is, all the rest of Europe carry ID cards, what’s the big issue. Well, the reason the rest of Europe carries ID cards, is because they’ve invaded each other for the last several hundred years and the conquering country needs to control the population – think WWII and (said in a German accent) vere are you papers! (papiere bitte).

Of course, Britain hasn’t been invaded for about a thousand years, so no foreign power has forced ID cards upon us, which is why we don’t have them. So, ID cards and all the things that they are going to tag onto them, such as biometric and financials are all about control, through an RFID chip, which will eventually be an implant. 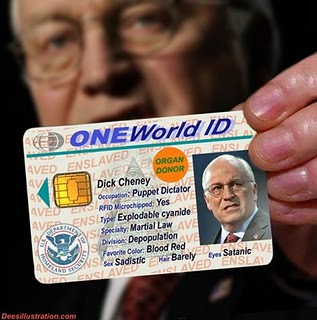 Global Research, May 16, 2013
Url of this article:
http://www.globalresearch.ca/the-cashless-society-arrives-in-africa-the-multipurpose-biometric-national-identity-smart-card/5335292
It was recently announced at the World Economic Forum in Cape Town, South Africa that MasterCard and the Nigerian National Identity Management Commission (NIMC) under the government of Nigeria would form a partnership to distribute a new identity card to every Nigerian citizen. The purpose of the card is to have all Nigerian citizens participate in the financial services sector under the control of MasterCard, a multinational financial services corporation headquartered in New York. MasterCard’s press release ‘MasterCard to Power Nigerian Identity Card Program’ stated:

As part of the program, in its first phase, Nigerians 16 years and older, and all residents in the country for more than two years, will get the new multipurpose identity card which has 13 applications including MasterCard’s prepaid payment technology that will provide cardholders with the safety, convenience and reliability of electronic payments. This will have a significant and positive impact on the lives of these Nigerians who have not previously had access to financial services.

The program is also designed to move Nigeria into a cashless society, one that is dependent on financial institutions, Wall Street and the Nigerian government. It will be managed by the financial elites of Wall Street, technocrats and of course Washington. All forms of financial transactions would be exchanged through plastic credit and debit cards that would have implanted RFID chips. Michael Miebach, President of the Middle East and Africa division at MasterCard supports the Nigerian government’s decision for a new cashless society,“Today’s announcement is the first phase of an unprecedented project in terms of scale and scope for Nigeria,” said Michael Miebach

“MasterCard has been a firm supporter of the Central Bank of Nigeria’s (CBN) Cashless Policy as we share a vision of a world beyond cash. From the program’s inception, we have provided the Federal Government of Nigeria with global insights and best practices on how electronic payments can enable economic growth and create a more financially inclusive economy.”

The problem with a cashless society is that the state can terminate your electronic financial lifeline if anything were to happen within the country, for example any form of protests, economic downturns, a war or if a financial institution such as MasterCard were to go bankrupt. There are many other reasons that the state or its’ corporate backers can decide to turn off the RFID chip. When you a have a powerful financial institution issuing payments electronically with a government that is supported and controlled by Washington, unlimited control of the populace becomes inevitable. 70% of Nigeria’s population is living below the poverty line as of 2010. How can MasterCard and the Nigerian government benefit millions of Nigerians who are living in abject poverty? Is MasterCard going to offer low interest rates on its credit cards in a country that has a more than 70% of the population in poverty with many living with less than a dollar a day?

Another aspect about the National Identity Smart card is that it can be used for surveillance of individuals under the state. With Nigeria facing a civil war between Islamists insurgents and minority ethnic groups from the oil rich Niger Delta, the National Identity Smart cards can be used to identify its enemies. The MasterCard press release stated how it identifies the individual cardholder:

The new National Identity Smart Card will incorporate the unique National Identification Numbers (NIN) of duly registered persons in the country. The enrollment process involves the recording of an individual’s demographic data and biometric data (capture of 10 fingerprints, facial picture and digital signature) that are used to authenticate the cardholder and eliminate fraud and embezzlement. The resultant National Identity Database will provide the platform for several other value propositions of the NIMC including identity authentication and verification.

The announcement was witnessed by Dr. Ngozi Okonjo-Iweala, Minister of Finance and Coordinating Minister for the Economy in Nigeria, who stressed the importance of the National Identity Smart Card Scheme in moving Nigeria to an electronic platform. This program is good practice for us to bring all the citizens on a common platform for interacting with the various government agencies and for transacting electronically. We will implement this initiative in a collaborative manner between the public and private sectors, to achieve its full potential of inclusive citizenship and more effective governance,”

The Nigerian based independent newspaper The Guardian with reporter Marcel Mbamalu along with the Africa Press Organisation (APO) interviewed the Division President of Sub Sahara Africa for MasterCard, Daniel Monehin in an article called ‘Identity Card: Biometric Data of Nigerians Remain with FG, Not MasterCard, Says Monehin’:

Marcel Mbamalu: You talk of something close to general application of the card; yet, the finance Minister was quoted as saying that it will begin with government pensions before…
Daniel Monehin: That was in response to the question that was asked the honorable Minister as to what would be the criteria for selecting the pilot citizens. She responded that she’s really excited at the auspicious time that this is going on because there’s a lot of work that is being done centrally for central treasury and for payment within the federal government, and she would like to see pensioners being part of this first group of the pilot, so that the federal government can begin to load their payment automatically, take out the physical nature of it so that the old tale of people dying on the line while trying to wait on the line to collect their pension would be a thing of the past.
The whole thing that is happening is that this is a platform not just for receiving government tension but for receiving government pensions, benefits, bursary payments, NGO’s that are funding private segments of the society can be funded directly; salaries can be paid directly. Anybody with that card has a whole new world opened to him or her. So, from government-to-people payments, from people-to-people payments, ATM all of those platforms or avenues are open. This is not a card that is restricted, its not even restricted to Nigeria; it is loaded.
You can go out of Nigeria to Ghana, Gambia, USA, China and use it. It is accepted in 210 countries and territories, and over 35 million acceptance locations around the world.
So, in terms of potential, this is a massive platform and what the minister just alluded to is just one segment of its use, not all.
The issuance is starting within the next three months. The National Identity Management Commission (NIMC) is going to do an event locally to flag it off.

Nigeria’s decision to have a cashless society under corporate control in the near future is a disturbing trend for humanity. Let’s hope that the Nigerian people resist MasterCard and the government and find an alternative economic solution that will allow them to live in free society they deserve.