From the link below you have to laugh but must understand the mind of the Scottish people. If the King has no clothes a Scotsman will be the first to tell him so and if that same King talks the proverbial he will quite frankly, with expletives, tell him he’s talking shite.
“Rachel, a young woman in a wheelchair who had wheeled herself on to the Royal Mile to blockade the second taxi Farage tried to take, said simply: “Ukip are just bullshit.””
http://www.guardian.co.uk/politics/2013/may/16/nigel-farage-edinburgh-protesters-van
Kind regards,
Gordon. 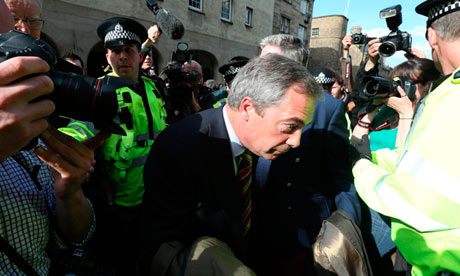 TAP –  I wonder how Scottish Ukipper Lord Monckton fares in his native land.  As a former adviser to Mrs Thatcher, the expression ‘lead balloon’ comes to mind.  The good news as far as I am concerned (half Scot) is that Scotland is swinging strongly against independence, and the severance of the two countries seems less likely than it did.  Farage will have to redesign his approach and try again.

He is quite right that the independence movement (independence within the Euro?  Hardly independence) has been hijacked by a bunch of young fascists, who are offending the majority of Scottish voters.  Who is funding the thuggery, you may well wonder?  The EU, no doubt.

Helen Szamuely Or he could do a deal with the SNP.


TAP –  You need a few cards for that.  He has few in Scotland.  He could always try

again.  I thought he did the right thing to stop the Scottish BBC interview.

Farage never claimed to be a priest, he says.

4 Responses to “Political debate alive and well in Scotland!”