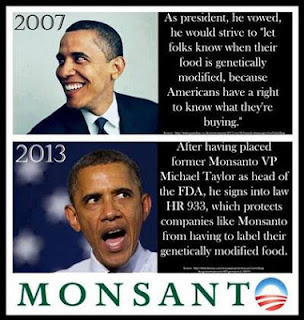 Monsanto made a weak strike back in the mainstream media against the burgeoning grass roots movement that is trying to bring the leviathan company down.
Monsanto is attempting to marginalize opponents while polishing their own dingy reputation.  “There is this strange kind of reverse elitism: If I’m going to do this, then everything else shouldn’t exist,” said Monsanto CEO Hugh Grant. “There is space in the supermarket shelf for all of us.”
The power of social media has never been more evident, as it has brought to light the unsavory science behind Monsanto, as well as their incestuous ties with the FDA, the Supreme Court, and the US government.  There is a new public awareness about genetically modified organisms that the company would prefer to have silenced. No one with a Facebook account can escape the facts that are being shared, exponentially, across the globe.
Grant said in a rather condescending interview:

Some people lose sight of the bigger global picture, the CEO said.
“This place is getting busier and more crowded,” Grant said. “As long as you’ve got money in your back pocket and you drive your station wagon to the supermarket on weekends, then it’s out of sight out of mind, so far.”
Opponents on social media are capitalizing on an increased public interest in how their food is produced, Grant said.
“And the sad piece of this is, it ends up either or,” Grant said. “So you get conventional agriculture or broad scale or however you define it, and organic. I think we’re going to look back on this period and say, ‘How on earth did that ever become the fight that it became.’”
“In the U.S., we have a system that works,” Grant said. (Bloomberg)

And why, exactly does that system work?
Perhaps it is the “elitism” displayed by Monsanto as it pads the pockets of US Congressmen and other elected officials.  Perhaps it is the “elitism” of being beyond the law and actually writing the text of their own protection acts.  Perhaps it is even the simple “elitism” of the employees of Monsanto, who are served organic food in the company cafeterias.
If Monsanto is so proud of their genetically modified produce, then why do they fight so hard against attempts to label it as such?
This is a blatant attempt to disparage a movement that has taken on a life of its own. On May 25, across the globe, people who believe that we should have the right to healthy, non-toxic food, or at the very least, LABELS, will unite to March Against Monsanto.  Hundreds of thousands of people are fans of Facebook pages that are organizing the protests.  Citizens intend to deploy all over the world to protest Monsanto and everything it stands for.  People from many diverse political backgrounds, different religions, and varying belief systems will all be unifying for one cause – to save humanity from this company that personifies evil while trying to display a halo of benevolence.
As for Monsanto’s claims that we, who stand against them, are elitist because we can “afford organics” – we can’t.  Many of us have to do without other things in order to pay for the few items on the market that are still safe to eat.  We are willing to do that because we understand that not only are the food products unsafe, but the farming methods are detrimental to the environment.  We know that these short-term “solutions” are causing long-term problems.  If the billions of dollars that Monsanto spends on researching ways to make Frankenfood  were instead invested in education, sustainable farming methods, and access to water, the world would be a lot better fed.
In a world run by money, social media may be the free weapon that turns the tide on this war against humanity.  Clearly the Monsanto Company can see that, and they are on the attack.
Find the March nearest you via Facebook.  Come on out – millions of us will be there!