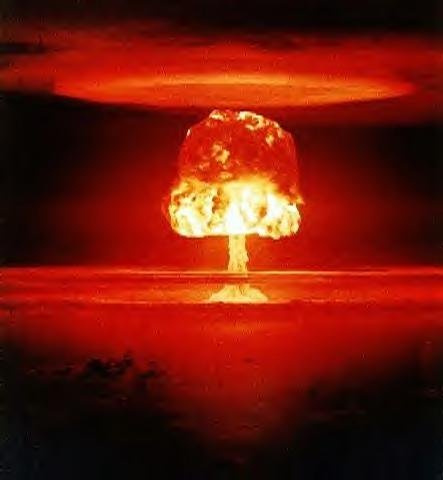 Many feared that this would happen.

Regardless of what the media says, Israel struck FIRST.

All rumor until confirmed true, however, this is the chatter

My comment
It really appeared to be at least a kiloton class weapon, with a mushroom cloud at least a KM high.
“earthquake preceeded blast”
My comment – Ok, the attack may have been nuclear, because it shook the ground FIRST, and then the “blast” penetrated the surface where it was observed by people on the ground. NOTE – this is not the blast in the video below.
RT is reporting a dead journalist, with surviving journalists thus far seeing over 300 dead. If that many dead are seen this soon, the actual count will be in the thousands until the divide by a thousand factor is thrown in by the spin team, official “dead” will likely be fewer than 20.
Another round of attacks by Israel is underway. It is now being reported that Syria has been forced to declare war on Israel
Israel is confirming the loss of two planes, and also confirming they are bombing Syria.
Israel has cancelled all schools tomorrow and told all people to stay home from work in case Syria attacks back
The Aleppo airport has been completely obliterated.
All power out in the entire Damascus metro area after latest round of Israeli airstrikes
Several Syrian military divisions completely wiped out, plus a key military airport not in Aleppo
If Syria declares war on Israel, in response to being bombed, the U.S. will step in to “defend” Israel’s aggression. If Israel bombed FIRST, then America is defending an aggressive nation. That’s all there is to it. And if Syria does not respond, Israel will proceed to flatten them. All is fair on the playground I guess, where bullies prevail and World War 3 is sought by the bankers at all costs.
I have found a way to totally circumvent Youtube. Please give feedback in the forum if it worked or it did not work.
An explanation of the “Allahu Akbar” statements in this video – The blast was so big that the people you can hear did not know if they would be dead when the shock wave arrived so they professed their belief in God before possibly dying. Shills are commenting that Muslims LOVE explosions, so they were praising God because they saw one, but it is obvious that in fact they thought they might be dead.
Here is a direct link in case the window below is defunct. The fire is from a previous bombing run, the big blast is near the end, this proves Israel is using the largest ordnance there is. This was filmed from approximately 3 kilometers away.
Hit the play button if it appears, or click in the open space below and the video window will probably show up. The server is LOADED right now. I still have to work the bugs out of this, PLEASE DO NOT LINK THIS VIDEO FROM OTHER WEB SITES, my server is nowhere near as robust as Youtube. Link it from there if possible.
http://www.jimstonefreelance.com/
The Tap Blog is a collective of like-minded researchers and writers who’ve joined forces to distribute information and voice opinions avoided by the world’s media.