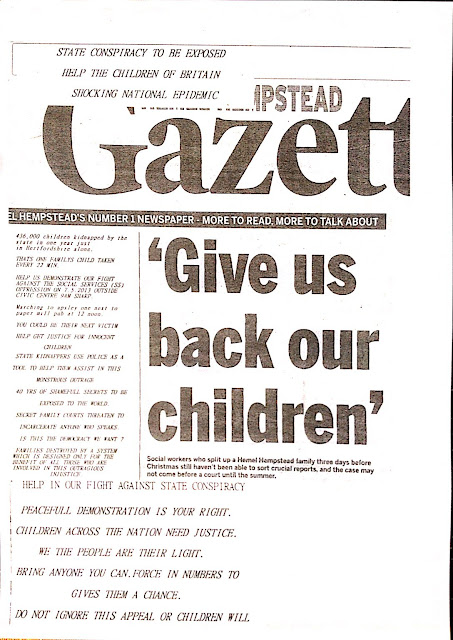 Hi there,
I’m very Grateful and fond of your website and the alternative views it shares.
I could do with your helps if possible. I met a father yesterday in my local town that has had 2 of his youngest children taken away from him 3 days before Christmas, by the state.
He is organising a peaceful march in our town of Hemel Hempstead on 7th May 2013. We have alerted the local authorities that there will be a peaceful protest.
There is actually a bit more to the story. The gentleman who had his 2 youngest children stolen because the state says “he is unfit to look after children”, the same county services allowed another boy (who is in state care) who is friends with one of his older children, to stay at this gentleman’s house after the foster parent of that child had asked the local authorities if this was ok? The answer was yes and the boy was allowed to stay although the same county had ruled that the man was unfit to be a parent.
If he is unfit to look after his own children the surely the social services shouldn’t be letting fostered children stay at his house.
I not sure if you do this sort of thing but I would like to ask you if you could possibly put these pictures on you Tap.blogspot about the protest.
If this is something that you do not do, then I understand and still would like to thank you in advance for you time.
I have attached a couple of jpeg’s
About the march on 7th may 2013-05-04
Many thanks
Majik

TAP – Good luck with your march. 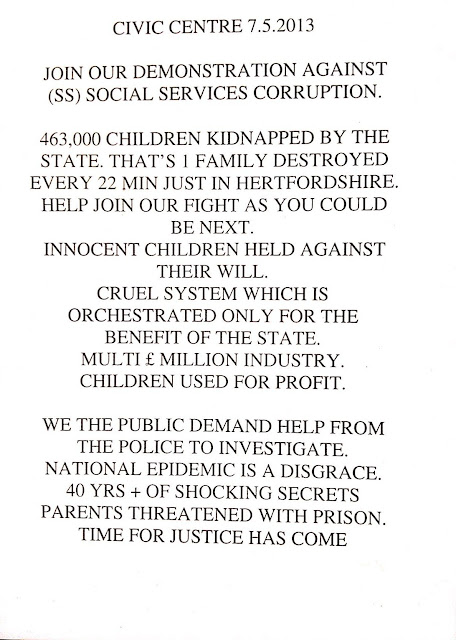 CASABLANCA, Morocco: Thousands of people marched in Casablanca on Sunday to protest against child sexual abuse in Morocco after a harrowing assault last month nearly killed a nine-year-old girl.
Many protesters, including many mothers and local celebrities, dressed from head to toe in white and carried white roses as they marched along the corniche, an AFP photographer said.
During the protest, organised by a coalition of rights activists calling themselves “Fi-ou” (Wake Up), demonstrators chanted slogans calling for children to be protected and denounced paedophilia.
“Our goal is to ensure paedophilia is listed in the penal code because so far it is only referred to as ‘aggravated rape’,” said Valerie Morales-Attias, one of the organisers.
Last month the child named as Wiam was found unconscious in a pool of blood by her 6-year-old brother after a neighbour in a village of the Sidi Kacem region in northwest Morocco sexually abused and beat her, media reports said.
The man, a father said to be “mentally ill,” dragged the child to a field where he attacked her using a sickle, the reports said.
Wiam was operated on for seven hours to repair several fractures, a broken tendon and a ripped ear, her surgeon Tazi El Hassen told AFP.
“She is no longer in danger. It was a miracle” she survived, Hassen said, adding that she was also being monitored by psychologists.
http://www.dailystar.com.lb/News/Middle-East/2013/May-05/216082-thousands-march-in-morocco-against-child-abuse.ashx#axzz2SRnqopNc
The Tap Blog is a collective of like-minded researchers and writers who’ve joined forces to distribute information and voice opinions avoided by the world’s media.