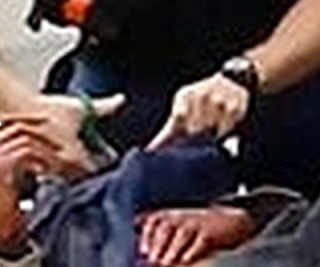 These are clearly scissors being used.  See link below to see that Daily Mirror used faked footage in its video.

Two men down by gunfire? Even that is a hoax: they used air-guns: it can be heard in the pop. Video showed on of the fraudsters charging the police car. Those wild-eyed ‘Muslims’: what else would anyone expect. Yet, now that they are playing wounded, the real action starts:

One the men are down on the ground, the men in the police gear (and a woman) loom over them. Cohort brings the black case out of the hatch back: they are working fast, like the Boston hoaxers. First, pull down some of the heavier layers. It might appear at first glance that he is checking out the person for abdominal wounds. Yet, the photographs prove that is not the case. He is preparing this hoaxer for the scam:

Policeman or actor-policeman now works towards the next step and searches for the key tool, the shears, and starts cutting away the clothing. This is apparently what he is reaching for, now:

Shortly thereafter he can be seen in action, shearing away

These are clearly shears. Moreover, the policeman is clearly stripping off the clothes.

The results of the shearing: skin exposed on the upper body, sharp edges of the clothes clearly noticeable

In this higher definition photo both actions can be seen, the stripping off of clothes through cutting shears and the preparation of the fake blood for application:

Moreover, it can be seen that there is nothing wrong with this man and that he is merely acting. This means that the Mirror footage showing blood bursting out of their backsides was doctored.
See the moulage kit with the fake blood packet, here. This is definitive evidence of a hoax. By this time one or more of the packets were already in his hands: