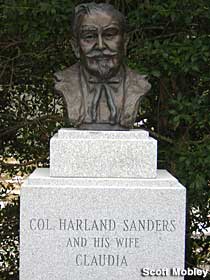 The six decades’ old fast food franchise KFC recently rolled out Original Recipe boneless chicken in its 4,500 US locations.1 The new slogan: “No mess. No fuss. No bones about it.”
The company is so convinced boneless chicken is the way of the future that they’re actually considering eliminating on-the-bone chicken from its menu altogether. According to the featured article:

“McDonald’s execs began experimenting with a range of non-burger options: chicken pot-pies, bone-in fried chicken, deep-fried onion chunks. None of them were successful, until they offered customers deep fried chicken chunks. The McNugget was born.

That was 1980, when about 80 percent to 85 percent of chicken consumed in the US was unprocessed… Ten years later, the numbers had almost reversed…

While the rotisserie chicken made a bit of a comeback in the mid-‘90s, the idea of eating the whole bird was, for the most part, a thing of the past… According to internal KFC surveys, nearly four out of five servings of chicken in the US today are off-the-bone, the inverse of 30 years ago.”

Why might this be “a big deal”? Well, for one, processed chicken nuggets, regardless of brand, are far more likely to contain all sorts of additives and fillers you’d be better off without.
For example, I wrote about the questionable ingredients of McDonald’s Chicken McNuggets back in 2010. Only half of Chicken McNuggets are actual meat. The other 50 percent includes corn derivatives, sugars, leavening agents and completely synthetic ingredients.
In a 2003 lawsuit against McDonald’s, Federal Judge Robert Sweet2 even questioned “whether customers understood the risks of eating McDonald’s chicken over regular chicken.” But there’s yet another reason for my questioning the trend of going boneless, and it’s even less savory than that…

The Future of Food: Bioengineered Meat

Few are talking about this, but scientists have been working on bioengineering “cultured” meat for the past decade. According to a September 2011 Huffington Post article,3 scientists at the University of Maastricht in the Netherlands claimed to be as little as 12 months away from delivering the world’s first bioengineered synthetic hamburger.
As of this writing, the hamburger has yet to be presented, although I doubt that means the plan has been abandoned.
The article also pointed out that London’s Royal Society had released a global food supply report, in which they called for a synthetic meat solution to feed the world’s growing population without causing environmental destruction.

“The only barriers? Overcoming the social stigma and the RS scientists say it could take another decade before it rolls out to the masses,” the article states.

Then, in February 2012, The Economist4 followed up on the research. Other Dutch scientists, led by Dr. Mark Post at the Eindhoven University in the Netherlands, expressed hopes of decimating animal husbandry altogether by altering how meat for the masses is produced. The article explains how this laboratory-created meat is created:

“Dr. Post’s cultures, grown from stem cells, are sheets 3cm long, 1.5cm wide and half a millimeter deep. To make the world’s most expensive hamburger 3,000 of them will be needed. The stem cells themselves are extracted from cattle muscle and then multiplied a millionfold before they are put in Petri dishes and allowed to turn into muscle cells.

When they have done so, they are encouraged to exercise and build up their strength by being given their own gym equipment (pieces of Velcro to which they can anchor themselves in order to stretch and relax spontaneously). The fatty cells of adipose tissue, needed for juiciness, are grown separately and then combined with the muscle cells before the whole thing is cooked.

Producing meat in Petri dishes is not commercially viable, but Dr. Post hopes to scale things up—first by growing the cells on small spheres floating in tanks and ultimately by using scaffolds made of biodegradable polymer tubes, which would both add the third dimension needed for a juicy steak and provide a way of delivering nutrients and oxygen to the steak’s interior.”

Sure, companies like KFC may have a point when they say they’re just changing their meals to meet the needs of the “chicken nugget generation.” But a side effect of getting used to the idea that chicken meat doesn’t have bones is that, at any point, the meat used in these processed nuggets could be exchanged for bioengineered meat, and no one would be the wiser…
I sincerely doubt bioengineered meat would be advertised, since it’s hardly a selling point—at least in the beginning. What the potential health ramifications might be from eating such meats are completely unknown, but it’s clearly not going to be identical to meat from an animal.  CONTD link below
Dr Mercola