COMMENT –  How does Cameron claim to bind the next parliament ? Furthermore are we expected to believe the deceitful treacherous turd.

Viscount Cranborne: I apologise for interrupting the noble Lord when he is in full flow. What makes the noble Lord think that it would be possible for this Government’s statement of intention, not even expressed in legislation, to bind subsequent governments?

Lord Carter: No Parliament can bind its successor. I shall return to that point; it is central to the argument.

The constitutional safeguard that we have now is not the presence of hereditary Peers in this House. It is the Septennial Act as amended by the Parliament Act. I shall return to that point in replying to the amendment tabled by the noble Earl, Lord Perth.

It makes you laugh.  How many promises has he made already.  Will anyone believe this next promise mark 6?  They would be mad if they did.  By 2017, Britain’s democracy will be even more of a sham than it is now.  Any referendum of such importance will be manipulated to bring the right result, just as it is being delayed into a period by when it will hardly matter.

AND MORE LAUGHS TOO FROM NICK CLEGG – 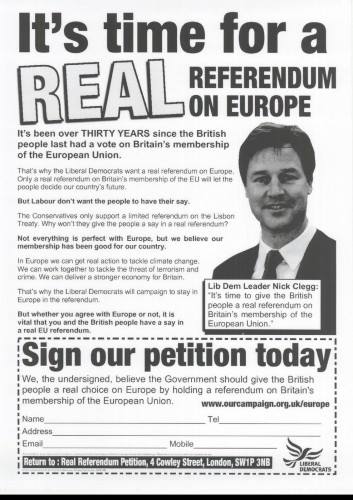