David Turnbull sends to the Tap – 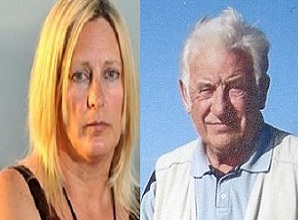 Agony of woman jailed in secret: Daughter locked up for trying to save father from care home tells of terrifying police swoop

By ANDY DOLAN, STEVE DOUGHTY, TAMARA COHEN and PAUL BENTLEY
PUBLISHED: 23:04, 24 April 2013 | UPDATED: 01:01, 25 April 2013
The woman imprisoned by a secret court yesterday described the shocking moment police descended on her father’s care home to ‘cart me off to jail’.
Wanda Maddocks was sentenced for trying to remove her father John from a home where his family thought he was in danger of dying.
But she was not present in court, nor was she represented by a lawyer, when the judgment was made – and her sentencing was not made public for six months. Speaking out: Wanda Maddocks, the first person to be imprisoned by the Court of Protection, was trying to remove her father John from a care home where his family feared he was in danger of dying
Miss Maddocks, 50, is believed to be the first person to be jailed by the Court of Protection, which settles the affairs of those too ill to make their own decisions.

Last night the case was at the centre of a furious row over behind-closed-doors justice as MPs condemned the secrecy of the court that jailed Miss Maddocks.
She was visiting her frail father when officers arrived to break the news that she had been sentenced to five months in prison. Keen walker: John Maddocks pictured in 2003
She said: ‘I walked out of the care home and saw a small white van, then two female police officers approached me with two court officers.
‘They told me I had been sentenced to jail for contempt of court. I couldn’t believe it.
‘They told me it was almost unheard of for somebody to be jailed like that in a civil hearing without first being given the chance to explain themselves.’
Miss Maddocks served six weeks in Foston Hall – the women’s jail in Derbyshire which was home to Maxine Carr, girlfriend of Soham killer Ian Huntley – following her arrest in September.
The Court of Protection had originally ruled that Mr Maddocks, who suffered from Alzheimer’s disease, must stay in the care home in Hanley, Stoke-on-Trent, because the plans for his care put forward by his children were considered inadequate.
It argued there was no choice but to take control of his affairs when he was found collapsed in his home by his carers. The council also deny he was badly treated during his stay in several care homes.
What has angered the family and open justice campaigners, however, is the draconian way in which Miss Maddocks was treated and the fact the secretive court was able to send her to jail.
Yesterday Miss Maddocks, a property developer, whose home is in the Turkish holiday resort of Fethiye, said: ‘I spent two weeks in the remand section and was then transferred to the main jail. I was ganged up on by the other inmates and one woman rushed at me and hit me.
‘She did it because she thought I was lying about my reasons for being incarcerated. She couldn’t believe I could have been jailed over something so petty, as she called it.’
Miss Maddocks added: ‘If my case had been in the public domain the judge would never have dared to jail me. There would have been uproar.
The Human Rights Act is supposed to guarantee everybody the right to a family life. It is the council and the court who have broken my father’s human rights, not me.’ Miss Maddocks was jailed on September 11 last year after the sentencing in her absence by the Court of Protection in Birmingham, and sent to Foston Hall prison in Derby
She said that while in Foston Hall she became too scared to ring her father, a painter and decorator who ran his own business, while in prison, out of fear of somehow breaking the restrictions designed to keep the case secret.
‘The court paperwork threatened to seize the family’s assets if we spoke to the press or anybody else about this,’ she said. ‘I was terrified. I eventually called my father after almost two months, to tell him I would soon be released, and he was crying his eyes out. He was heartbroken because he was missing me so much.’
She said the family were told that social services would agree to Mr Maddocks leaving the care home only if she and his three other children – Ivan, 55, Wayne, 54, and Eden, 49 – could submit an acceptable ‘care package’ to the court.

Ordeal: Wanda Maddocks was held in the same jail as Maxine Carr
The care package had to explain how they would divide responsibility for looking after Mr Maddocks, who needed continual care, what food they would provide for him and any outside help they could call on, such as carers.
But she said the judge turned down four separate submissions.

4 Responses to “Woman arrested and jailed without trial”