I’M CALLING THE ATTENTION OF ALL THE PEOPLE OF THE PHILIPPINES ESPECIALLY THE GOVERNMENT! This is the story… Last Monday in Brgy. San Agustin he was administer and vaccinated by the midwife named “Linda”.
Linda injected one on the shoulder (anti-tetanus) and one on that leg (hepa B).
But after the injection the blood running from that injected leg is not stopping until it turn out like that. 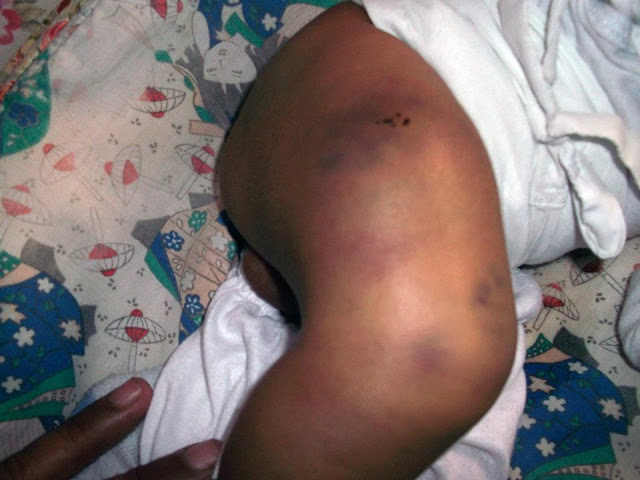 Then yesterday evening the baby confined to the general hospital because he became pale,his shaking and don’t want to feed.
And then today, he is confine in Heart of Jesus Hospital.
In any hour he will be in COMA and will die… How pity he was!!!
He is only a month old yesterday!
But because of the irresponsibility of that government midwife that baby is suffering and die soon… That simple yet big issue of injecting and vaccination can cause death to baby when it give in improper way… So now I wanted to share this to the people of the Philippines especially to the city government of San Jose City… Please give justice to that little angel! You must have an action regarding to this incident!

TAP – In the rich world if a baby dies, it’s called cot death, or shaken baby syndrome.  Never is a vaccine blamed in any publication.
They might save one life from measles vaccination, but there will be 5000 autistic cases, and numerous deaths from the vaccinations.
The Tap Blog is a collective of like-minded researchers and writers who’ve joined forces to distribute information and voice opinions avoided by the world’s media.