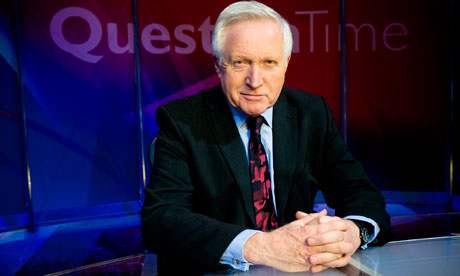 Louise Mclean Writer has left a new comment on your post “UK plans to move to compulsory vaccination“:

There is no question that for a long time Question Time has deliberately put PLANTS in the audience to further the Establishment agenda, just as they now have trolls working on forums attacking people who are anti-vaccine or anti-GM or anything they don’t want.

Anonymous said…
I saw the last 30 mins of question time. When I heard that so called Doctor say “measles was a killer” I couldnt beleive my ears! Then they all went on to discredit Dr. Andrew Wakefield, I was even more furious.

Just as it becomes clear the measles vaccine no longer works, as it is admitted in Parliament that the MMR is no longer effective against measles, a comment comes in from Road Hog.  He watched BBC Question Time last night, and found total nonsense being given the air, as normal, this time with a supposed ‘doctor’ advocating compulsory vaccination.

Bill Gates will be pleased.  Anyone got a  youtube for this?

Road_Hog said…
Just switched on BBC Question Time for 5 minutes and a quick larf, to remind me why I don’t watch it anymore.

The measles outbreak in Swansea was mentioned and they had a young guy in the audience who claimed to be a doctor.

He said he had no problem with compulsory vaccination and they already had the right to detain people and administer vaccinations for things like TB.

Well, first off, we had eradicated TB in Britain, until the elites/globalists gave us open borders and mass unfettered immigration from places like Pakistan/India, which have re-introduced it into Britain.

This so called doctor said, that measles was a killer. I don’t know anyone that died of measles when I was a kid. We’re being prepared for compulsory vaccination.

As it is the BBC and on iplayer, it is only available to UK residents, or people using a British proxy IP address.

The discussion starts at 32:20 when a woman from the audience asks about compulsory vaccination.

Griff Rhys Jones talks for a bit (apparently his father was a doctor) and then just before 35:00 a guy in the audience claims to be a doctor and says that he wouldn’t have a problem with compulsory vaccination.

I know I shouldn’t get personal, but quite worryingly, he has the look of someone that is retarded and I certainly wouldn’t want him as my doctor with his attitude.

I turned it off afterwards, as they started to slate Andrew Wakefield. I truly believe we’re being softened up for compulsory vaccination.

I’d like to remind readers, that not all vaccines are the same. During the outbreak of Swine Flu in 2009, the German government and army received a different vaccine to the general population.

The standard vaccine had mercury and squalene in it. One is a preservative and the other is an adjuvant – the latter being a component that stirs up the vaccine meaning less of it is required.

The one that the government and army ordered, had neither of these components, but the vaccine was more expensive because it was required to be more concentrated due to the lack of the afore mentioned items.

You do have to ask, if the standard vaccination was safe, why did the government feel the need to order a different vaccination.

And an additional report from your favourite doctor.

7 Responses to “UK plans to move to compulsory vaccination”