AMY GOODMAN: You’re an Icelandic member of Parliament. Have you spoken to any of your counterparts here in the United States, members of Congress?

BIRGITTA JÓNSDÓTTIR: I haven’t yet, but I plan to come back in June. So, if there is anybody watching this show and wants to speak to me, I would be very grateful if we could speak together about Bradley Manning and the significance of his work.

AMY GOODMAN: Can you talk about how you have been targeted by the U.S. government?

BIRGITTA JÓNSDÓTTIR: Yes. It’s actually—like, most people don’t understand how serious it is, because—like somebody asked me, “Have you been followed since you came to the States or in Iceland?” And yes, I am followed all the time. But it’s not with the people in the offline world; it is online. And it is much easier to follow people there—everything they do and everybody they meet and at what time.

So, what happened in January 2011, I get an email from Twitter saying that they had taken a subpoena to court and unsealed it. And in it, it said that the Department of Justice wanted all my personal messages and IP numbers and so forth, without my knowledge, within three days. And I was fortunate enough to be represented by EFF and ACLU to try to—

BIRGITTA JÓNSDÓTTIR: Yeah. And they did that pro bono, and I’m thankful for that, because it’s an unprecedented case. And unfortunately, we lost it on every count—every account. But it is not only these Twitter messages that they want. There are apparently four other companies that were requested to hand over my information, which they already have. 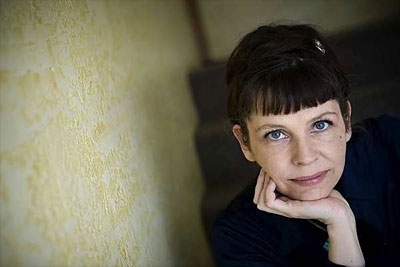 BIRGITTA JÓNSDÓTTIR: I don’t know. We can’t get it unsealed, by request by the U.S. government. And we’ve taken it again and again to court to try to unseal it, because they say the U.S. government says to the judge that they have investigative interests, or they don’t want me to know because they’re investigating. But they won’t tell me what they’re investigating. And I have been told by the Department of Justice, through the U.S. embassy in Iceland, that I am not the subject of criminal investigation. But the justice system here is so opaque. It’s so impossible to understand how it functions. And like my case is relatively mild compared to the cases I’ve heard of people here in the United States, like Jeremy Hammond and Barrett Brown and all these young, really talented people—and let’s never forget Aaron Swartz—that are being persecuted for things that they would never be persecuted for in my country.

AMY GOODMAN: Aaron Swartz is the young social justice hacktivist, 26 years old, who took his own life a few months ago, committed suicide in Brooklyn, New York, who was being prosecuted by the U.S. government in Massachusetts for—well, their charge was that he had released millions of pages of JSTOR documents, that are available to students all over the country in the United States for free.

BIRGITTA JÓNSDÓTTIR: Yes, I think, like many of these harsh sentences—

AMY GOODMAN: Not for the release of, but for downloading them from a computer at MIT.

BIRGITTA JÓNSDÓTTIR: Yeah, downloading them, yeah, yeah. So, and I think that many of these cases are because—the harshness of them are because those that are putting forward the sentences, they don’t really understand the nature of the Internet and how we function there, those of us that spend a lot of time there working. And—

AMY GOODMAN: Explain what you mean by that.

BIRGITTA JÓNSDÓTTIR: I explain—well, like I started to work on the Internet in ’95, and it completely opened up a new world, because all of a sudden I had access to like-minded people that were doing similar things, and we could share knowledge and do projects together. And it is all based on this sort of crowdsourced openness and sharing. So, when you try to put forward all the restrictions we have in the real world—well, actually, the offline world, because the Internet world seems just as real sometimes—it’s impossible, because this system was created to be able to bypass all these walls and restrictions. And so, when you grow up in a culture of sharing knowledge, work, passions, friendships, across borders—there are no borders—and so you can’t put up the walls, because we will always find ways around the walls, because it is the nature to crowdsource and share. And that is how we have developed so fast. And that’s how I’m here. I would never be here unless I had lived on the Internet for a while. We could never have released the “Collateral Murder” video like we did, unless we had access to the Internet.

AMY GOODMAN: Talk about your involvement with the release of this video, the “Collateral Murder” video about the killing of 12 people, July 12th, 2007, in New Baghdad, the military Apache helicopter that opened fire. Two of those people were Reuters employees. Reuters had attempted for years to get this videotape. The military or the U.S. government would not give it to them. They only got it when you all released it, now the third anniversary of that release. What did you have to do with this, Birgitta?

BIRGITTA JÓNSDÓTTIR: I come from an activist background, that whenever something is needed to be done, I just do it. And so, when I saw the video in February 2010, I was profoundly moved. I was moved to tears, like many people that watch it. But at the same time, I understood its significance and how it might be able to change our world and make it better. And so, I offered to help in any which way possible.

AMY GOODMAN: Were you a parliamentarian at the time?

BIRGITTA JÓNSDÓTTIR: Yes. I did—like I participated, before the Iraq War started, with millions of people from around the world in an attempt to stop the war from happening. So I knew that this would happen. To have it actually in my living room in front of my eyes, the true horror of war and all these war crimes that I had heard of but I’d never seen, felt to me as important enough to take a little bit of a risk. So, I did a lot of the background investigation. I organized the Icelandic volunteer team. I pulled out the photos that we put on the website. And I was the coordinator for the YouTube account.

AMY GOODMAN: This is when you were all, with Julian Assange, holed up in Iceland preparing to release this videotape?

BIRGITTA JÓNSDÓTTIR: Yeah. We actually rented—I rented a really nice old house in the center of the city, so it wasn’t really a bunker.

AMY GOODMAN: When I said “holed up,” I didn’t mean— like in some legal sense.

AMY GOODMAN: —like in some legal sense, but you were all in this place.

BIRGITTA JÓNSDÓTTIR: Well, we called it “the bunker,” out of a joke, and then everybody thought it was like a bunker. And there was actually porcelain cats in the windows and stuff, so… But it was an incredible and complex action, because it had to be done completely in secrecy. And then we got Kristinn, who was just earlier on the show, and his cameraman to go off to Iraq. And that was very dangerous, because it was just around the elections, and nobody had been into this area before. And at the same time, we are like working on the video to try to figure out what’s on it. And gradually, all these dots and pixels become real people. And that is really the importance of it. It is so easy to brush away—it looks like a video game the first time you see it, and in particularly if you listen to what the people are saying. But I think that the most—

AMY GOODMAN: For our—for our TV audience, we’re going to show the video as you’re talking, that we just played.

AMY GOODMAN: And for our audio and radio audience, they can go online at democracynow.org, if you’re not familiar with that video. But go ahead.

BIRGITTA JÓNSDÓTTIR: Yeah, I really urge everybody to watch it. And if they’ve seen it before, watch it again. Yeah, so, I think the most moving moment—I was in Iceland because I had to go back to my parliamentary work; I spent all my Easter holiday working on this project—was, I was sitting and maintaining the YouTube account in my home, and I get a message on it from a soldier that says, “I am the soldier that found the children and moved them to safety. I have never been able to stop thinking about them.” And that turned to be Ethan McCord.

AMY GOODMAN: And I want to encourage people to go to our website at democracynow.org to see the extended interview with Ethan McCord, who got—he was one of the soldiers on the ground, right?

AMY GOODMAN: Who shows up at the scene, gets these critically wounded children, and cannot get them out of his mind, goes back to base, asks for help, for emotional help, and he said his commanding officer said, “Suck it up.”

AMY GOODMAN: And he deteriorated from then on emotionally.

BIRGITTA JÓNSDÓTTIR: Yes. He is very brave. And I have so much respect for people like him that actually dare to challenge the injustice that is brought on them. There are so many young people that are in the—like in the military because they can’t afford to go to college. And then they’re faced with this incredibly hostile environment, where like you are on one second with a dying child in your hand, and on the other second you’re told to suck it up instead of getting proper consultation. I think that is very disturbing, because it will bring broken people back home. And that’s why there are so many broken things here.

AMY GOODMAN: I want to turn to the case of the jailed computer hacker Jeremy Hammond, an alleged member of the group Anonymous charged with hacking into the computers of the private intelligence firm Strafor and turning over some five million emails to the whistleblowing website WikiLeaks. Jeremy Hammond could face a life term. Last Friday, Birgitta Jónsdóttir, you read a poem to him outside his jail. We’re going to go to a clip of that.