I seem to remember that the Tate Modern has been forced to remove paedo pics before.

05 APR 2013
I read, a few years ago, that they were displaying a totally nude and highly sexually provocative photo of Brooke Shields. The photo was taken when she was 10 years old!

Tyler Robinson adds…
I would like to make it very clear that the Brooke Shields picture was NOT part of my original comment and I did NOT send it in to The Tap.

We don’t really need to see it…

TAP  –  How else do you get across the fact that Britain’s premiere art gallery is run by disgusting perverts?  People should not visit Tate Moderne of the king the Gallery approves. 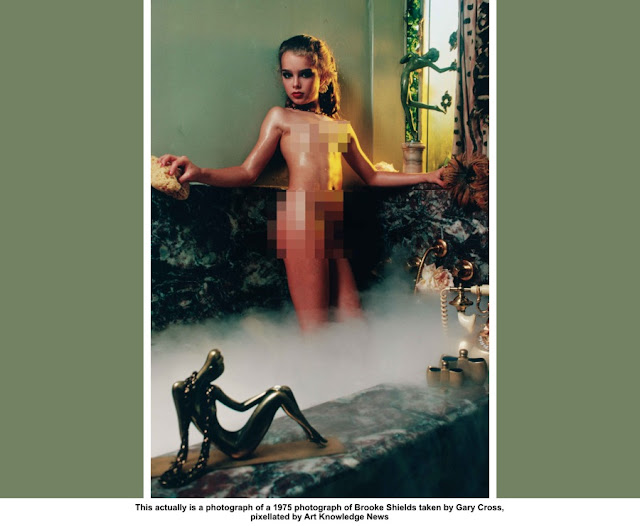 Maybe TPTB are trying to turn all adults in to paedos, using reverse psychology?

Maybe this is why the corporate media is constantly full of paedo stories and convictions – and then at the some time music videos and films, and sometimes TV, showing sexualised images of young men and women.

There’s a film for hire at my local library called 13. Do a search for the DVD cover, you’ll see just what I mean…

I have wondered if the same also is true for anorexia nervosa – the constant banging-on about this condition to young women and girls – and then media induced obsession with weight, fat, looks, image, style, zero-size models, ‘heroin-chic’ etc.

How dangerous for young girls to be immersed in this mode of thinking. Young people are unceasingly blasted with this poison.

Could reverse psychology be a weapon here, as well?

And nowadays we have snow-blizzards in London in April! It must be the end of the world soon…and then we will all have to answer before God for all that we have done…I hope God properly nails these bastards !

Hi Tap, within 10 seconds, you can get The Original, Unpixelated  Version, (+) Others, without using any Sophisticated Search Terms.
So Google haven’t put a Divert on That Then, Have They?
THEY ONLY DIVERT SEARCHES, FOR INFORMATION ON FREE THINKING WEB SITES, LIKE YOURS, IT WOULD APPEAR. IT TAKES FAR LONGER TO GET TO YOUR SITE. THAN IT TOOK TO GET THIS – TRY IT, Starting From Scratch.
To continue You may not want to Publish this link, I sent it to show you it’s relevance w/r/t TATE GALLERY EXHIBITION
“THE WOOMEN in THE CHILD” (Brooke Shields by Gary Gross)
Charlotte Higgins and Vikram Dodd – guardian.co.uk, Wednesday 30 September 2009 17.53 BST
A detail from the original photograph of Brooke Shields by Gary Gross, which Richard Prince used in his artwork displayed at the Tate. Photograph: Gary Gross
A display due to go on show to the public at Tate Modern tomorrow has been withdrawn after a warning from Scotland Yard that the naked image of actress Brooke Shields aged 10 and heavily made up could break obscenity laws.
The work, by American artist Richard Prince and entitled Spiritual America, was due to be part of the London gallery’s new Pop Life exhibition . It has been removed from display after a visit to Tate Modern by officers from the obscene publications unit of the Metropolitan police.

The Tate Gallery has suspended viewings of work by the artist Graham Ovenden, after he was convicted of a number of child sex offences at Truro court on Tuesday (April 2, 2013). The Independent reports that the artist, who is known for his images of children, some nude, was found guilty of six charges of indecency and one count of indecent assault. His work has triggered legal action several times in the past, yet his work continued to be held in high regard in the art world. Ovenden’s work has been displayed in galleries across the world, including in the Metropolitan Museum of Art in New York.
REGARDS  ………  WASP