Today is the day that 3 year old girl died from a cluster bomb landing on her house in Belgrade.  Her parents have never repaired the family home as a reminder of the terrible loss they suffered.  The house has become a focal point for remembering the suffering of the Serbian population during Blair’s air raids.

Jill Dando was killed by the Serbs on April 26th 1999 in retaliation for Blair authorising the air strike on Serbia’s main TV station, which killed a top news presenter.  Dando died three days after the strike.  People in Britain have never been told why she died.  Search Jill Dando on The Tap.

Anniversary of death of 3-year-old victim of NATO bombing 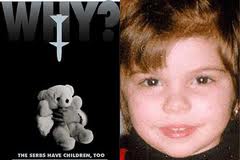 BELGRADE — Today marks 14 years since the death on April 17, 1999, of three-year-old Milica Rakić, killed during a NATO air raid.

The child was fatally injured in the bathroom of her home, when a shrapnel from a cluster bomb hit her in the head.
The apartment building where her family lives is located some six kilometers from the military airport in the Belgrade suburb of Batajnica.

The traces of the damage done by the bomb are still visible on the facade around the bathroom window. The family decided not to repair the wall, as a reminder of the horrific crime.

The toddler’s death became the symbol of the suffering of the Serbian people during the war that NATO waged against the country in the spring of 1999.
http://www.b92.net/eng/news/society-article.php?yyyy=2013&mm=04&dd=17&nav_id=85755
The Tap Blog is a collective of like-minded researchers and writers who’ve joined forces to distribute information and voice opinions avoided by the world’s media.