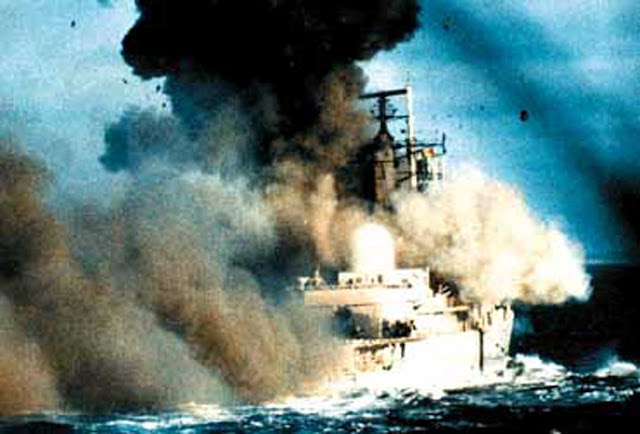 HMS Coventry hit by exocet missile 1982 Falklands War.  The provider of the Exocets is now Pope.

Can we trust anything the ITCCS claims? Are they a reliable source, or a bunch of nutters?

The International Tribunal into Crimes of Church and State (ITCCS)
ITCCS Breaking News Update – Thursday, April 11, 2013
(9 am GMT)
sent to The Tap by David Turnbull
Pope Francis is linked to Exocet Missile Acquisition, according to British government source –  Margaret Thatcher’s Death and Queen’s Pending Resignation are Connected
Brussels and London:
Whatever it is that dwells in Rome behind the mask of religion and empire is inexorably being revealed. And its mask slipped further yesterday with more startling revelations involving the new Pope Francis, Jorge Bergoglio.
A reliable source in the British civil service who has provided accurate internal leaks in the past to our Tribunal has revealed the following to an ITCCS officer in London:
Commencing in September of 1981, the present Pope Francis 1 acted as an agent for the Argentine military Junta to acquire Exocet missiles which were used against the Royal Navy flotilla during the Falklands War the following year.
During September and October of 1981, Pope Francis, as then-priest Jorge Mario Bergoglio, applied through his friend Roberto Calvi, a high official in the Vatican Bank, for the funds that allowed the Argentine Junta to buy “at least twenty” of the Exocet missiles at a cost of over $200 million, according to the British source.
The same source stated to an ITCCS officer in London on April 9, 2013,
“The Junta knew the British would oppose their seizure of the Malvinas so they got their man Father Bergoglio to get them the missiles, since he was friends with Roberto Calvi. Margaret Thatcher was the Prime Minister in 1982, and both she and Buckingham Palace knew that it was Bergoglio who had lined up the missile funding for (General) Videla. Thatcher in fact approved an MI-6 plan to eliminate the priest, Father Bergoglio, but that fizzled out. But now that same priest has become the Pope, and Thatcher just suddenly died, and the Queen is stepping down under rumored assassination fears, after she had already cancelled her March 6 trip to Rome when it became clear that Bergoglio would become Pope. These are not coincidences.”
After the Exocet missile deal was successfully concluded, the relatively unknown cleric, Fr. Jorge Bergoglio, was rapidly elevated in the Argentine Catholic hierarchy. He became the head of the entire Roman Catholic Church in Argentina in 1998 as part of his reward.
On June 17, 1982 – just two months after the start of the Falklands War – Bergoglio’s Vatican bank associate Roberto Calvi was found dead, hanging under Blackfriar’s Bridge in London.
http://www.onlinepublishingcompany.info/content/sitenewsreadmore/infobox/news/template/default/active_id/746
http://www.nytimes.com/1982/07/28/world/italy-s-mysterious-deepening-bank-scandal.html?pagewanted=all
Two books have confirmed the Vatican Bank and Roberto Calvi’s link to the Argentine Exocet deal: In God’s Name by David Yallop, and The Entity: Five Centuries of Secret Vatican Espionage by Eric Frattini.
Is the Jesuit Pope Francis linked to the deaths of Roberto Calvi and former Prime Minister Margaret Thatcher, and to an assassination plan against Queen Elizabeth? This evidence and recent events certainly suggest so.
On April 10, 2013, an official inquiry about these facts and questions was sent by our Tribunal to the Papal Office and to the Vatican Secretary of State. Our inquiry has gone unanswered.
Stay tuned for more evidence and updates at www.itccs.org  .

–
See the evidence of Genocide in Canada and other crimes against the innocent at www.hiddennolonger.comand at the websites of The International Tribunal into Crimes of Church and State at www.itccs.org andwww.itccs.tv .
An International, multi-lingual ITCCS site can be found at: http://kevinannettinternational.blogspot.fr/david

YouTube – Videos from this email
The Tap Blog is a collective of like-minded researchers and writers who’ve joined forces to distribute information and voice opinions avoided by the world’s media.