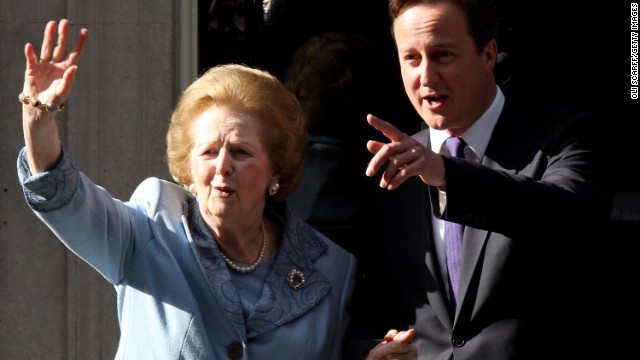 has died aged 87 of a stroke

I have never been a fan of Thatcher’s, I thought at the onset of her Journey, we might be in far a Rough Ride. I don’t think I was wrong either.
She pandered to The Whims of The E.U., Destroyed Our Industrial Base, in favour, Hi Tech, Industries, Making us a Service Industrial Base.

Our Steel & Coal Industries Never competed on an Even Playing Field with Europe. I am neither Communist nor Fascist, but in many respects I would agree with Scargill’s Assessment. Her only excuse could be Naivety, as Hindsight is a Wonderful Thing, but she started the Rot Selling off our Utilities & Assets, & Encouraged The Cavalier Culture that is now an Intrinsic Property of The Society we now have.

It was obvious that the mass of small share holdings would Gravitate Back to The THIEVING BANKERS & CORPORATIONS, who thereby would become Majority Shareholders, not difficult for them. REMEMBER ECONOMICS IS NOT A GUESSING GAME, AS MANY THINK – IT FOLLOWS THE SAME LAWS & RULES OF THE NATURAL SCIENCES, thus it is possible to Taylor Make Financial Problems.

WE, DON’T EVEN OWN OUR OWN WATER. THEY EXPORT IT & WE FOOT THE BILL FOR RUNNING THE SYSTEM, & THEIR IMPROVEMENTS. THEY PICK UP A HANDSOME PROFIT, FOR THE SHAREHOLDERS.

THATCHER’S LEGACY FOR MANY IS THAT SHE HAS RUINED THEIR LIVES, BY LEAVING THEM JOBLESS, WITH NO SELF RESPECT,& TOTALLY RELIANT UPON THE STATE, THIS HAS LEAD TO SOCIAL CHAOS, THE BREAK UP OF FAMILIES,& A CULTURE OF VIOLENCE, & A TOTAL DISREGARD FOR CIVILISED HUMAN VALUES.

THIS IS A CONCERTED PROCESS, ANALOGOUS TO THE SEQUENTIAL FALL OF LINKED LINES OF CRITICALLY SPACED DOMINOES. DISPLACE ONE & THEY ALL FALL DOWN, IN A VERY SHORT TIME. IT ONLY THEN TOOK THE THREE NOT SO WISE MONKEYS, BLAIR, BROWN & CAMERON TO TOTALLY SHAFT THE SYSEM UP COMPLETELY.

To finish this is a Comment on Thatcher, I sent in to The D_M that they refused to Print.

THATCHER WAS NEVER MEANT TO SUCCEED, SHE ALSO NEVER GOT TO GRIPS WITH THE FACT THAT THE SECRET GOVERNMENT, WERE CALLING THE SHOTS, NOT HER. She was surrounded by Perverts & Paedophiles. She was set up by The Bilderbegers, In Falklands & The Miners Strike & they tried to Blow Her Up at Brighton, blaming The IRA. She Sold The Country Down The River, Over The Maastricht Treaty. But The QUEEN, WAS THE ULTIMATE TRAITOR, by giving it The Royal Ascent, but as The Popes Representative Perhaps She Too Had No Choice. With The Assassination of Airey Neave, Thatcher was Totally Out of Her Depth., surviving by The Skin of Her Teeth in “Shark Infested Waters”. She was also a close Fried of Saviles, which was another setup, as we will no doubt find out. THATCHER WAS ALSO RESPONSIBLE FOR DESTROYING OUR INDUSTRIAL BASE & JOBS, GIVING THE BANKERS A FREE HAND WITH THEIR FIAT INVESTMENTS, & MONEY LAUNDERING BY THESE GANGSTERS. SAVAGED BY HOWE (The Dead Sheep), SO JUST ANOTHER PUPPET.

TAP – She believed in sound money.  Inflation tumbled as did government debt under her leadership.   She tried to choose the right path on many occasions appointing many good ministers like Keith Joseph, John Biffen – but was fully exposed to the evil all around her.  She was hopelessly naive about Ronald Reagan, and didn’t have any notion of the real sources of evil in the world.  Did anyone have any idea at that time?  We have more idea of what is happening now, but no real notion of how, for example, three world wars were predicted and being prepared for as far back as 1870.

15 Responses to “Mrs Thatcher has died”