Writing about chemtrails in 2012, many of us came to the conclusion that a very cold winter would be the result of blocking the sun with aerosol clouds.

We were nearly right.

What’s being done is to prolong the winter.  Any gaps in the clouds are soon filled with aerosol, stopping the sun’s warmth from breaking through to ground level.  A month of the growing season has already been lost, along with 30% of crops like rapeseed, according to BBC’s Countryfile  much of which sprouted and then died in the cold. 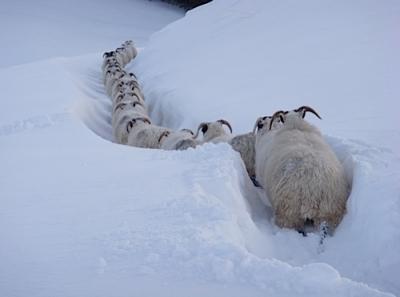 Animals like sheep on the higher ground are dying out in the fields.  Many others have aborted unable to complete their pregnancies.  Nationally a very significant amount of food output has been lost.

Farmers, who would normally put their herds out to grass by now, are having to buy in feed, with little of quality available at a reasonable price.   Their stock numbers are being reduced, and plans being made to prepare for another long winter next year.

The depopulation agenda would require nothing less.  Less and more expensive food.

It is noticeable that while the northern parts of the globe are suffering a prolonged winter, many hotter parts are suffering extremes of heat.  They’re messing with aerosol clouds, blocking the sun in northern countries.  What else are they are up to?

Is HAARP redirecting the jet stream trapping heat nearer to the equator?

The weather forecast tonight talks of a return of cold weather next weekend with snow on high ground all over again.  It’s nearly May.  How long will this winter go on for?  Will summer be cancelled completely?

After a relatively quiet day yesterday I’ve just been outside and see that the chemtrailing has returned with a vengeance.  I was hoping to enjoy a beautiful day today but it looks like the sky is to be used as a dumping ground for barium and aluminium and whatever else is in the chemtrails.
I only saw one chemtrailer yesterday ……..

…..so the sky was actually quite blue and I had a fantastic day on the golf course.
However I’ve just taken a few pictures of the sky this morning and I think it’s going to be a long day of spraying……..

I’ll take pictures throughout the day and see how things develop……….

Things developed as anticipated. I was over in Fife visiting a friend and took these photos en route ..

7 Responses to “How long will winter last?”