I’ve been sent a copy of Tom Watson’s latest letter to Theresa May asking for the whereabouts of Geoffrey Dickens’ child abuse dossiers that were given to Leon Brittan in 1983/84. The Home Office have had almost 2 months to respond to Tom Watson’s original request, and have so far come up with nothing. Perhaps the government think people are going to forget about this…
The November 1983 dossier contained information about a connection between the Paedophile Information Exchange and Buckingham Palace staff. Operation Fernbridge are currently investigating the Elm Guest House paedophile ring which is thought to have involved members of Buckingham Palace staff.
The January 1984 dossier contained information about sexual assaults at a children’s home, and also named prominent paedophiles including a television executive. Could the children’s home have been Richmond Council’s Grafton Close home, which supplied boys as young as 10 to be abused by paedophiles at Elm Guest House?
TAP –  Anyone have any better copies?  I picked this up from a Tweet. 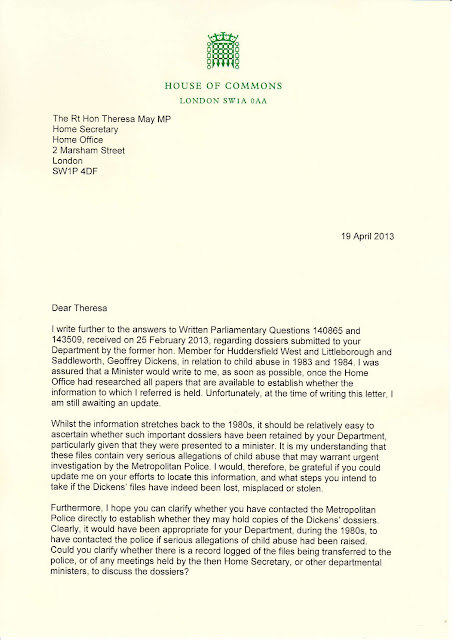