TAP – didn’t McAlpine buy some of the pictures? 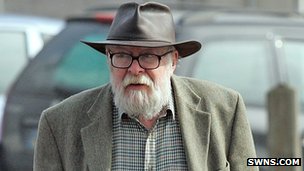 Ovenden, of Barley Splatt, near Bodmin Moor in Cornwall, was not present in court, having been taken ill last week.
Judge Graham Cottle released Ovenden on bail and adjourned sentencing for a date to be fixed at Plymouth Crown Court.
A former pupil under Sir Peter Blake, Ovenden has had work exhibited in galleries across the globe.
He had denied all the charges relating to four children – now all adults – between 1972 and 1985.
Ovenden was described in court by prosecutor Ramsay Quaife as “a paedophile” who abused children while they modelled for him.
But the artist denied the abuse ever happened. He told the court he had taken pictures of children – including those in various states of undress – but said they were not indecent.
When giving evidence, Ovenden said there was a “witch-hunt” against those who produce work involving naked children and he accused police of “falsifying” images recovered from his home computer.
The Tap Blog is a collective of like-minded researchers and writers who’ve joined forces to distribute information and voice opinions avoided by the world’s media.