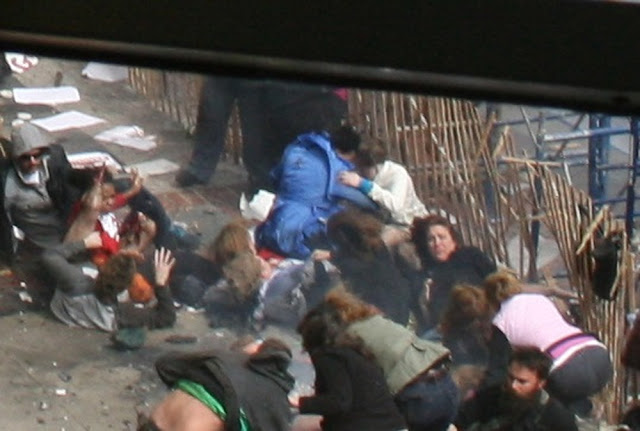 These are actors. This is staged. It was flash powder. There was no crock pot nail bomb. There are no bombers, only patsy. If your looking for a gunman, look at the Army in the streets of Boston. Share this knowledge with everyone.

I mentioned in my April 21 posting titled “Indisputable Photo Evidence That the Boston Marathon Bombing Was Staged: ” that a push ups video of Lt Nick Vogt revealed that his left hand pinky finger is missing, while the guy identified as Jeff Bauman in the hospital photo released and on his donation page, is seen with an intact left pinky finger. I had spent a lot of time looking at photos of the Boston Marathon “Jeff” to see if I could spot his left hand opened up, showing the missing pinky finger. I didn’t find one…until tonight.

Earlier in the evening, I added a series of enlarged photos of “Jeff Bauman” in the hospital, Jeff Bauman from photos on his donation page, and “Jeff Bauman” in the wheelchair at the Boston Marathon on April 15th. My contention was that the Jeff Bauman seen the the hospital photo and on the Bauman donation page is not the same guy who was first laying on the ground and then seated in a wheelchair at the Boston Marathon on April 15, 2013. After posting the additional photos for comparison, I spent time going through Youtube videos to see what else I could add to the premise that the Jeff Bauman seen in the hospital photo is not the same guy who was photographed being hustled down the street in a wheelchair at the Boston Marathon by the guy (actor) with the cowboy hat.
Lo & Behold, I came across a video posted by the same guy whose videos I had embedded on my April 21 posting. His Youtube name is ” havf8″ (I don’t know his real name). Anyway, he mentioned a link that had all of the frames in sequence showing the Boston Marathon version of “Jeff Bauman” (and friends).

After I carefully screened each photo, I found one that shows “Jeff Bauman’s” opened left hand and Voila! , the left pinky finger is missing! The incriminating photo is saved as ” V7px8wa“.