Osiris sends to the Tap –

If you loose both your legs from explosive trauma half your blood is gone in one minute via the femoral arteries, youre dead after two. Bleeding out is worse with blunt force trauma (like shrapnel) because flesh is torn rather than cut, exposing more arterial and vascular tissue. The human body holds 5 to 6 LITERS of blood. If that really happened you would see blood EVERYWHERE, the guy would be drenched in it. You would also see what’s called arterial spurtting from the injury. Most likely he would vomit after turning ghost white from shock, then turning delirious or passing out. As for the “tourniquet”…
Its not even tied off, its suspended via gravity, which would literally do nothing to an arterial sever. There’s no pressure applied. There’s no knott with a turn stick for leverage. You can clearly see a gap in the nonexistent wrap job on his left inner thigh (left anterior proximal for you experts) His hands have no blood on them. There’s no blood on the ground. The color in his hands and lips shows good circulation.
This is an actor. This is staged. How did they pull it off though? I can show you.

Here in frame six on the left we see the the man with a hood setting up the fake leg wound prosthetics. His attention and hands are right there. The woman is acting as a shield covering what’s happening. 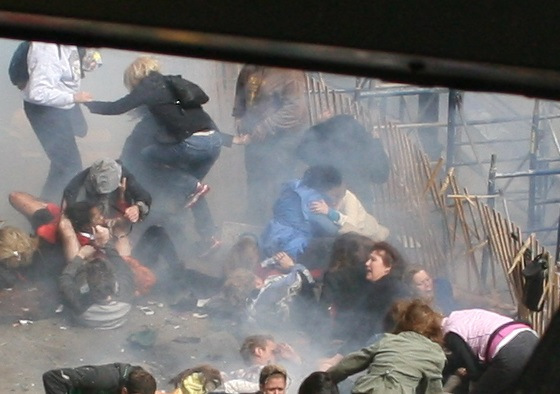 The pictures are faked, but still pretty unpleasant.  Click on them below if you wish.

ALSO – gruesome story from B4IN saying Boston suspect was walking naked and handcuffed, which makes the official story of how he died impossible.  I won’t copy the post across as the body of the suspect is too horrific.  His brother won’t be able to testify either, according to latest reports.  How convenient.

One Response to “Are You Just A Believer Or Do You THINK?”