I hope each and every one of you read this article.

The 6 min video is also worth the time!

Steve Watson
Infowars
Shocking footage has emerged from Friday’s lockdown in Boston, where police, federal agents,national guard troops and SWAT teams enforceddoor to door searches of everyone’s home within twenty blocks as the entire city was placed under orders to stay off the streets. 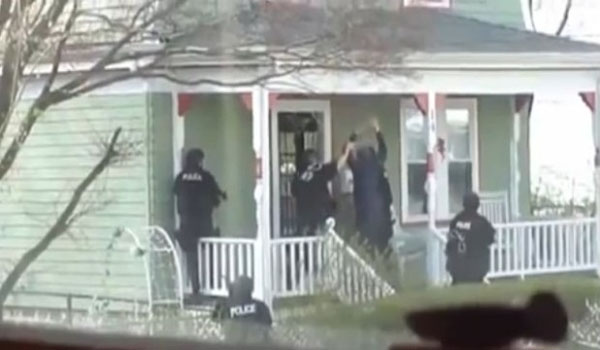 The video, shot by a resident from their own house across the street, shows police barking orders at men and women as they order them at gunpoint to identify themselves, put their hands on their heads, and get out of their own home. They are then ordered to run down the street to be further frisked by police as scores of armed militarized cops look on.
The scenes look like something out of a disaster movie, with the backdrop of suburban Americajuxtaposed with what is essentially martial law playing out in full daylight.
The story floated in the mainstream media that the door to door searches were conducted with the voluntary consent of the residents of Watertown is clearly false. 9000+ Police locked down an entire city and went in with full force, with armored vehicles and combat gear, all to search for an injured 19 year old kid who turned out to be cowering in someone’s back yard.
While armies of police roamed around people’s homes and private property, Public transportation was shut down, businesses were forced to close, and a no-fly zone was enacted over Boston in an unprecedented show of force.
At this point, as military helicopters buzzed over neighborhoods, the Fourth Amendment had ceased to exist in Boston, which quickly resembled a war zone.
The Tap Blog is a collective of like-minded researchers and writers who’ve joined forces to distribute information and voice opinions avoided by the world’s media.

One Response to “Americans ordered out of their homes at gunpoint”