wasp said…
Hi, Tap I thought you might be interested in this, a repeat of stuff I told you last year, that appears to have disappeared. 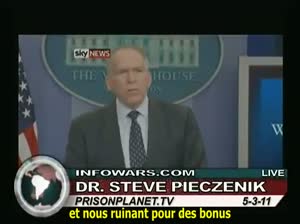 So who in the world is Dr. Steve Pieczenik (pronouned Pa-chi-nik)?

As I have stated, I have told you about this Chap in previous Posts, one in particular was related to the Supposed Assassination of Bin Laden, when Clinton H. was trying to make it look convincing, whilst watching a Video, but didn’t, actually pull it off.

Many have no idea of the background of this Chap, I have even seen it stated on one site that he was an Insurance Salesman, Turned Author.

He received his Medical Degree from Cornell. He has a Psychiatry degree from Harvard. And a PhD in political science from MIT.

Pieczenik served as a Deputy Assistant Secretary of State and/or Senior Policy Planner, under Secretaries Henry Kissinger, Cyrus Vance, George Schultz and James Baker. Which also means he has served under 5 different US Presidents dating back to Nixon.

Dr. Pieczenik was the principal International Crisis Manager and Hostage Negotiator under Secretaries Kissinger and Vance. During this time he developed conflict resolution techniques that were instrumental in saving over five hundred hostages in different terrorist episodes

In 1991 Dr. Pieczenik was a chief architect of the Cambodian Peace Conference in Paris.

He is currently an advisor to the Department of Defense.
Dr. Pieczenik also was instrumental in the formation of The Delta Force.
Dr. Pieczenik has boldly proclaimed that not only has Osama Bin Laden been dead for several years of kidney failure and/or Marfan’s Syndrome…but that he is ready and willing to testify before a grand jury that a high level United States General informed him 9/11 was a stand down/false flag operation and that Bush Jr, Cheney, Rumsfeld, and Rice should all be tried for war crimes.

I have never believed any of the official claims of the 9/11 conspiracies and I still do not. And let me be clear I am not asking you to either. However, it is fact that our intelligence community have used false flag events in the past to stoke the American patriotic fires and launch us into war before. And when a man with credentials such as Dr. Pieczenik says he is ready to testify before a grand jury that a top US General told him 9/11 was a false flag, and that he is concerned the potential for another one is high, ……….

The Link didn’t work for some reason, so here it is again, TRY THIS LINK