I believe many of our country’s chronic health problems would simply disappear if greater attention was paid to the root problem — the food you eat.
Americans’ reliance on processed foods is a major factor that drives the rampant disease increases in the US, such as diabetes. According to a new report from the American Diabetes Association,1 an estimated 22.3 million people were living with type 1 or type 2 diabetes in 2012, up from 17.5 million in 2007.
But why do Americans buy so much processed food and junky snacks? Well, first of all, junk foods are heavily promoted by the US government via agricultural subsidies for crops like corn and soy.
Add to that misleading yet highly effective marketing, and — the focus of this article — the addictive nature of junk food, which is a science in and of itself.
In order to protect your health, I advise spending 90 percent of your food budget on whole foods, and only 10 percent on processed foods. Most Americans currently do the opposite, and this will undoubtedly have an effect on your health, especially in the long term.

In the featured New York Times article,2 investigative reporter Michael Moss writes about the extraordinary science behind taste and junk food addiction, and how multinational food companies struggle to maintain their “stomach shares” in the face of mounting evidence that their foods are driving the health crisis.
In it, he mentions a 1999 meeting between 11 CEO’s in charge of America’s largest food companies, including Kraft, Nabisco, General Mills, Procter & Gamble, Coca-Cola, and Mars. He writes:

“James Behnke, a 55-year-old executive at Pillsbury… was anxious but also hopeful about the plan that he and a few other food-company executives had devised to engage the C.E.O.’s on America’s growing weight problem. ‘We were very concerned, and rightfully so, that obesity was becoming a major issue… [T]here was a lot of pressure on food companies.’
…[Behnke] was engaged in conversation with a group of food-science experts who were painting an increasingly grim picture of the public’s ability to cope with the industry’s formulations — from the body’s fragile controls on overeating to the hidden power of some processed foods to make people feel hungrier still. It was time, he and a handful of others felt, to warn the C.E.O.’s that their companies may have gone too far in creating and marketing products that posed the greatest health concerns.”

The Parallels Between Cigarettes and Junk Food

On that day in 1999, Michael Mudd, vice president of Kraft, did “the unthinkable” during his speech — he drew a connection between processed foods and cigarettes. We no longer condone cigarette ads for teens, having clearly established the health hazards associated with smoking, despite decades-long denials from the industry. 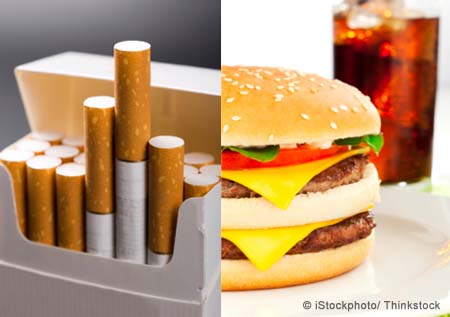 Yet we now blindly accept the same kind of misleading tactics being applied to junk food, even though the health ramifications rival, if not surpass, those of smoking. Mudd presented a plan to address the obesity problem, which would help defuse the criticism building against the food industry.