When I was a youngster we had snow in London that went up to your knees in places & everything carried on as normal, now we have a light sprinkle of the stuff that only just settles & the entire country grinds to a halt & people freeze to death in their beds.

When we had snow back then everyone was out chucking snowballs & building snowmen & having fun, now they’re too afraid to leave the house in case they catch a cold.  Anonymous.

The whole agenda is ‘climate change’ and ‘save the Earth’. The Global Warming scam pioneered by Al Gore backfired when the MET office emails got leaked which showed that the Earth was actually getting cooler.

I believe this definition describes these kinds of people:

The lunatics are in control of the asylum, as they say.  Anonymous.

It’s the big talking point.  Will life go on as normal, or will the whole system grind to a halt?  All because of a little light dusting of ‘the white thing’.   No weather report misses the opportunity to make it sound like this is the ultimate snow fall, hardly ever experienced by humankind throughout history.  It’s as if snow’s role in our lives has been rebranded.  Fun has become near catastrophe. 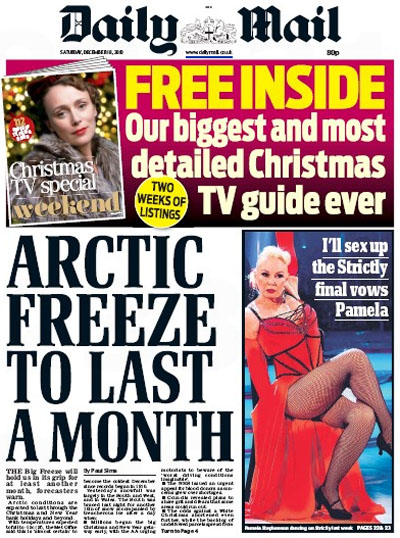 I understand the excitement snow causes in people from warmer countries, where the media shows snow as a kind of mystical event.  You will be asked when travelling in Asia,  ‘Do you have the white thing’ with wonderment in their eyes?  It might take you a while to figure out what ‘the white thing’ is, when you are asked.

In northern countries, surely snow is as normal as water and cold air.

When we were kids, snow was indeed normal.  Hardly a winter went by without a few weeks of it lying around on the ground, occasionally in very large quantities.  Sports were usually cancelled, but not school, and businesses didn’t close.  Life just went on.

The idea that snow is some kind of catastrophe which requires everyone to stay at home is an entirely new notion.   Society’s organisers get to see how well they control us all, by showing how easily everything can be brought to a halt.  Schools are told to close.   Parents have no choice but to head home from work.   Roads are cleared inefficiently and sporadically.  It’s total economic paralysis.

Fear is their favourite device.

Snow is being made into a monster.  Newspapers today are filled with dire warnings of gas rationing to come in two weeks time.  You don’t need to read the details.  It’s about as likely as a rocking horse starting to excrete.  But it keeps everyone in the state preferred by our controllers, on edge.

Not a day is allowed to pass without a threat of some kind beamed into the living room.  The best thing to do is switch off the TV.  Don’t buy the newspaper.  Enjoy the weather and the day.  They’ll spoil it for you if you let them.

Go for a walk.  Read a book.  Browse online.  Facebook.  Hobbies.  But first consciously make a decision to remove the idiocy of the media from your day.

It all sets the context for this piece from Global Research.

By James F. Tracy
Global Research, March 19, 2013
Url of this article:
http://www.globalresearch.ca/false-flags-fake-media-reporting-deceiving-the-public-social-engineering-and-the-21st-century-truth-emergency/5325982
On March 9, 1995 Edward Bernays died at the age of 103. His professional endeavors involved seeking to change popular attitudes and behavior by fundamentally altering social reality.[1] Since he laid the modern groundwork for deceiving the public we are for better or worse living out his legacy today.
Several years ago Project Censored directors Peter Phillips and Mickey Huff identified and explained the “truth emergency” that is among the greatest threats to civil society and human existence. This crisis is manifest in flawed (or non-existent) investigations into 9/11 and other potential false flag events, fraudulent elections, and illegal wars vis-à-vis a corporate-controlled news media that fail to adequately inform the public on such matters. While neglecting or obscuring inquiry into such events and phenomena major media disparage independent and often uncredentialed researchers as “conspiracy theorists” or, more revealingly, “truthers.”[2]
The truth emergency continues today, and social engineers like Bernays long understood the significance of undermining the use of reason, for it is only through reason that truth may be determined and evaluated. To be sure, individuals and institutions that have successfully achieved legitimacy in the public mind are recognized as having a monopoly on the capacity to reason and are thus perceived as the foremost bearers of truth and knowledge. Through the endorsement of “experts”—figures perceived as authoritative in their field—the public could easily be persuaded on anything from tobacco use and water fluoridation to military intervention abroad.
Today reason is defined one dimensionally; its relationship to truth largely taken-for-granted. Yet as Leibniz observed, reason marks our humanity, suggesting a portion of the soul capable of a priori recognition of truth. With this in mind the modern individual in the mass has been rendered at least partially soulless through her everyday deferral to the powerfully persuasive notion and representation of expertise.
However narrowly focused, under the guise of objectivity the institutionally-affiliated journalist, academic, bureaucrat, and corporate spokesperson have become the portals of reason through which the public is summoned to observe “truth.”
These agents of reason are largely bereft of emotion, moderate in temperament, and speak or write in an unsurprisingly formulaic tone. The narratives they relate and play out present tragedy with the expectation of certain closure. And with a century of commercial media programming the mass mind has come to not only accept but anticipate such regulation and control under the regime of institutionally-sanctioned expertise.
The selection and arrangement of experts by corporate media guarantees a continued monopoly on “truth,” particularly when presented to an uninquisitive and politically dormant public. Yet this phenomenon extends to ostensibly more trustworthy media outlets such as public broadcasting, where a heightened utilization of credentialed expertise is required to ensure the consensus of those who perceive themselves as more refined than the Average Joe.
This preservation of what passes for reason and truth cannot be sustained without a frequent dialectical struggle with unreason and falsity. Since many individuals have unconsciously placed their genuine reasoning faculties in abeyance and often lack a valid knowledge of politics and history, their unspoken faith in government and the broader political economy to protect and further their interests is groundless. Against this milieu those genuinely capable of utilizing their reasoning capacities in the pursuit of truth are often held up as heretical for their failure to accept what is presented as reality, with the requisite “conspiracy theory” label wielded in Orwellian fashion to denote such abnormal intellectual activity.
Lacking the autonomous use of reason to recognize truth, form often trumps substance. For example, a seemingly obscure news website with unconventional graphics or an emotional news presenter purporting to discuss the day’s affairs is typically perceived as untrustworthy and illegitimate by a public conditioned to accept forms of news and information where objectivity and professionalism often camouflage disinformation.
In 2013 the truth emergency is greater than ever, and in the era of seemingly never-ending pseudo-events and Potemkin villages presented by major media as the reality with which we must contend, the application of independent reason in pursuit of truth has all too frequently been replaced with an unthinking obeisance toward the smokescreen of expertise disguising corporate power and control.
The Tap Blog is a collective of like-minded researchers and writers who’ve joined forces to distribute information and voice opinions avoided by the world’s media.

4 Responses to “Snow in the media”