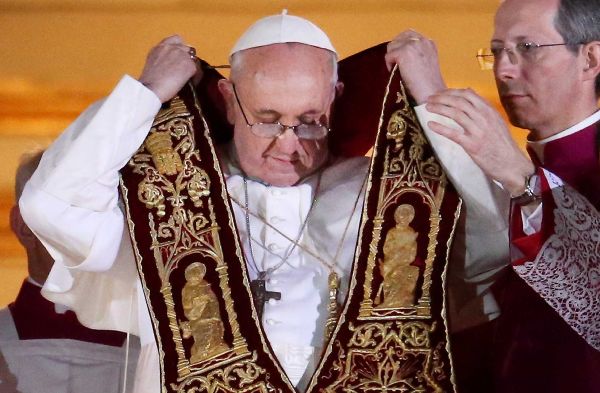 Hi Tap.
The Information I Gave in The Post I sent was was Correct, ie Total Jesuit Takeover of VATICAN, Ist Jesuit White Pope ever.

It would also appear that:-
Cardinal Bergoglio accused for stealing babies for Dictatorship

The prosecution and the Grandmothers of Plaza de Mayo today claimed in court that judges the systematic plan for the theft of babies born in captivity to be called to testify Cardinal Primate of Argentina Jorge Bergoglio, who today was again mentioned in court for crimes against humanity ………

Is This More of The Same, They Hope The Brain Dead Won’t Notice.

Posted on March 13, 2013 by itccs
A suspected criminal has been rapidly elected as the new Pontiff of the Church of Rome in a record two day conclave, being the first Jesuit in history to head the papacy.
Former Cardinal and Pope-elect “Francis I”, Jorge Mario Bergoglio, is accused of helping kidnap opponents of Argentina’s military junta during the 1970’s “Dirty War”, and of baby trafficking, by lawyers and members of the Plaza de Mayo human rights group. (Los Angeles Times, April 17, 2005, “Argentine Cardinal Named in Kidnapping Lawsuit”.
Besides his personal alleged criminality, Bergoglio – as a Jesuit – represents the group most responsible for the centuries-old Crimes against Humanity and Genocide for which the Jesuit Superior General was found guilty on February 25, along with Joseph Ratzinger and other Vatican officials.
The Jesuit Order established the murderous Indian residential school system in North America during the mid 19th century, and has led the destruction and killing of millions of non-Catholics around the world since its inception in the mid 16th century.
Under a secret oath administered to every member, the Jesuits are authorized and encouraged to kill, torture or overthrow any opponent of the Vatican and the Pope.
These facts, the Argentine allegations, and his complicity in the global conspiracy against children enunciated in the canon law Crimen Sollicitationas, makes the new Pope particularly liable for immediate arrest and sentencing under international law and the Common Law Court verdict of February 25, 2013.
The ITCCS understands that Jorge Mario Bergoglio’s election was a quick and uncontested arrangement, as evident in its rapidity: in less than two days, a record for papal elections.
Bergoglio’s election makes the guilt of the Vatican and its highest officials for Crimes against Humanity all that more severe. The new Pope, as the head fiduciary officer of the Vatican, Inc., assumes that guilt and liability.
Bergoglio is therefore subject to immediate arrest under the terms of the Common Law Court ORDER of March 5, 2013, issued by the International Common Law Court of Justice under the authority of jus gentium, the Law of Nations, and the Rome Statute of the International Criminal Court.
Accordingly, an application has been made by our Tribunal to these courts for an International Citizens Arrest Warrant, to be issued against the new Roman Pontiff, Jorge Mario Bergoglio – Pope Francis I, for Crimes against Humanity and involvement in a global criminal conspiracy based in Rome.
The ITCCS will soon be issuing more background evidence on the genocidal purpose and actions of the Jesuit Order in relation to the ongoing crimes we have documented; and of the evidence of Bergoglio’s suspected crimes in Argentina.
Issued 13 March, 2013
ITCCS Central, Brussels

–
The Tap Blog is a collective of like-minded researchers and writers who’ve joined forces to distribute information and voice opinions avoided by the world’s media.

One Response to “New pope is baby-stealer – and a Jesuit”