GET RID OF THIS EVIL JUDGE 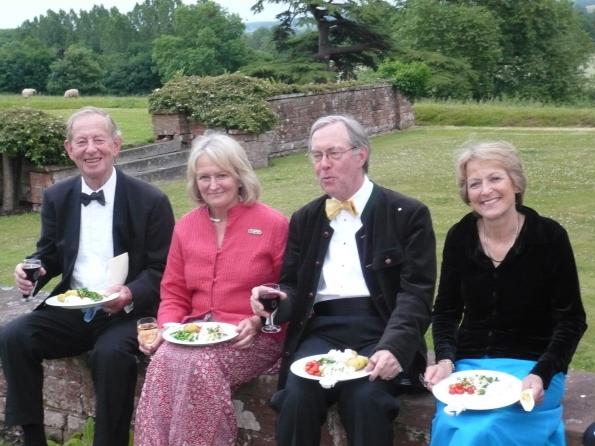 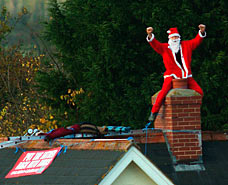 Jolly Stanesby, dressed as Santa, on the roof
A judge could face police questioning after claims he aimed a gun at a member of Fathers 4 Justice who was staging a protest on his roof.
Judge David Tyzack was accused of brandishing the weapon at a campaigner who climbed on top of his country residence dressed as Father Christmas.
The campaigner, Jolly Stanesby, claims he was threatened by the judge as he unsuccessfully ordered him off the £1million property.
But although Judge Tyzack admits holding the gun, he insists it was because he believed an “injured bird” had landed on his roof.
And he says that when he realised it was a man, he put his gun away and called the police.
The bizarre stand-off took place early yesterday morning, after the veteran campaigner donned a Santa Claus costume, climbed on to the judge’s house and unveiled a banner which read “Put the Father back into Xmas”.
The protest deliberately targeted Judge Tyzack, who earlier this month refused Stanesby’s court application for greater access to his daughter.
Mr Stanesby, 60, who plans to stay on top of the seven-bedroom house for “several days” said he feared for his life when the judge appeared below the roof armed with a double barrel shotgun.
A spokesman for the judge then blamed the initial denial on a “breakdown in communicaton” and said the judge had been carrying a gun because he thought a wounded bird had landed on their roof.
Peter Farr, spokesman for the Judicial Communications Office, said: “The Judge and his wife were woken at about 7.15 am by what they thought was the noise of a bird trapped on top of the roof of their house.
“Because he thought it was a bird he did get his shotgun and he did load it and took it outside.
“When he got outside and looked on the roof he recognised immediately the man and realised he was a protester.
“He took the gun straight back inside where he secured it and he then called the police to deal with the incident.
“There is absolutely no question of him pointing the gun towards this man.”
But a spokesman for Fathers 4 Justice said the group had taken legal advice and were considering pressing charges against the judge for threatening to endanger the protestor’s life.

#JUSTICE4ROSY – THE MARCH AGAINST INEQUALITY & INJUSTICE CONTINUES.
Our journey on the path to justice has been long and difficult, but no case encapsulates the barbarity of our secret family courts more than that of father and daughter, Jolly & Rosy Stanesby, whose case has now lasted more than 9 years.
We will be sharing their moving case stories when we launch our new web site in the coming days.
I ask everyone to attend the #Justice4Rosy protest and support this brave and courageous young lady whose valour puts many of us to shame. Rosy is determined to hold those responsible for what happened to her and her father to account and is demanding an apology from them.
It speaks volumes that instead of supporting a victim of the family courts, the Police have chosen to bully and harass a child in one of the most disgraceful campaigns ever waged by Devon & Cornwall Police. In the post Jimmy Savile /Hillsborough age, one would have hoped that children would be treated sympathetically and that the authorities would cease trying to cover up miscarriages of justice.
We warn them that Fathers4Justice remains as wedded to the concept of justice today as we were when I founded the organisation in 2001. That means there have to be consequences for those who have committed wrongs and that we as citizens have a duty to restore balance and justice to society.
If that means holding the ‘untouchables’ to account, we will.
Matt O’Connor, Founder, Fathers4Justice