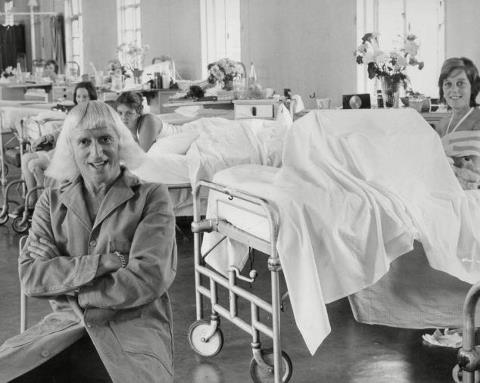 LEEDS is a big British City.  For many years parents have been suspicious about the huge number of deaths of children taken into care by the Leeds General Infirmary… It has now been revealed that JIMMY SAVILE was head of PEDO-RING of DOCTORS who regularly attacked children in care beds at the hospital… Report by CHRIS EVERARD:

The British press have published the following amazing headlines:

The gross and worrying upshot of the revelations is that Savile led a gang of doctors who molested child patients – and that a huge number of babies ‘died’ at the hospital during the time when Savile worked there as a volunteer porter – he chose this job because it gave him access to wheeling babies and children who were sedated before and after surgery… Many of those children died, or suffered brain damage after awakening from their surgical procedures…

The phenomenon was so bad, doctors in other hospitals called Leeds General Infirmary ‘THE KILLING FIELDS’…

Abuse at Stoke Mandeville Hospital took place between 1965 and 1988, while at Duncroft School, a children’s home, the allegations cover a period between 1970 and 1978.

‘There is no clear evidence of Savile operating within a paedophile ring although whether he was part of an informal network is part of the continuing investigation,’ the report says.

‘At Leeds General Infirmary, Broadmoor Hospital and Stoke Mandeville Hospital he was taken at face value as a volunteer and fundraiser, probably because of his growing celebrity status,’ the report states.

‘Having been accepted at these institutions he gained access to vulnerable children and adults.’

Savile is reported to have committed offences at hospitals around Britain, including one reported case at the famous children’s hospital Great Ormond Street in 1971.

A hospital spokeswoman said: ‘The contents of this report are clearly extremely distressing for all those involved.

‘In regards to the allegation made in connection with our organisation, we were made aware of this by the Metropolitan Police very recently. It relates to an incident in the early 1970s.

‘The police have said that they do not intend to investigate further.’

During a press briefing this morning, Peter Saunders, from the National Association for People Abused in Childhood (Napac), said he was told that Lord Patten had turned down plans to set up a helpline for potential victims.