The MEP (Roger Helmer) stated that he did not write it.

I think the writer is talking about the socio-political philosophy of ‘equality’, which is dressed-up as being beneficial for those less ‘fortunate‘.

It’s difficult to disagree with this concept – that government should NOT assist those less ‘fortunate’, at the expense of those more ‘fortunate’.

OK, here’s the analogy. Think of school sports days, when there must be no winners.

It’s the ‘winners’, or those more ‘fortunate’ that TPTB wish to undermine.

‘Equality’, in this context, means that the ‘fortunate’ or ‘winners’ cannot be tolerated.

Being in this class means that you are economically independent & industrious, that you do not rely upon the state for everything or, maybe, anything.

All must be equal; and that means equally dependent, equally compliant,
equally incapable of anything – including, most importantly, freedom of thought. (the freedom to say that 2 + 2 = 4 – see Orwell’s 1984 and the trial of Galileo Galilei)

Those who are economically independent and industrious, free-thinking and non-compliant are a threat to TPTB and their strangle-hold on populations and, therefore, nations.

The Knights Templar’s had an interesting philosophy. If you ‘protect’ something, you control it. You ‘protect’ it (society) to the point where it can do nothing for itself, in the same way that parents protect their children. Of course, parents want the best for their children. TPTB want nothing good for us, the goyim.

The one that does not run with the heard is the one that causes a problem.

No free thinking can be tolerated. Free thinking might lead to independent action – then there is a problem.

So, those who are industrious, free-thinking and non-compliant and economically independent are a problem.

The socio-political philosophy of ‘equality’ is a way of bringing these problem people back in to the heard, by taking away what they have and distributing it to those less ‘fortunate’. 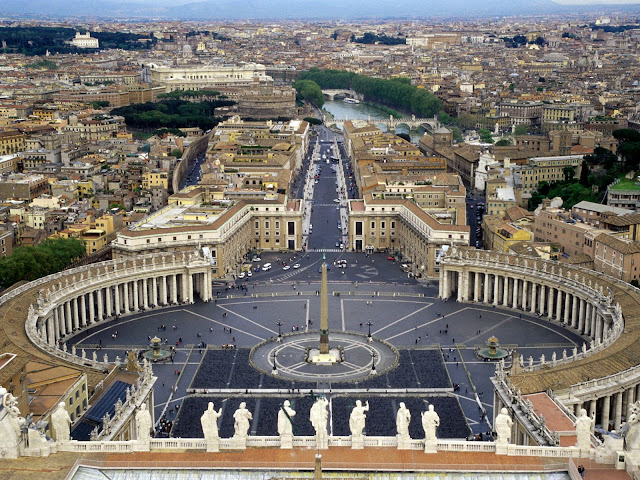 This philosophy comes, of course, from the Roman Catholic Church / State. It was thought up by Thomas Aquinas and is called ‘The Final Destination of all Goods’.

Do you recognise Communism / Socialism? Of course – well, this is where it comes from.

I wrote a post on a book called ‘Ecclesiastical Megalomania – The Economic and Political Thought of the Roman Catholic Church’ by John W. Robbins (1999) which details all this, quoting only Roman Catholic encyclicals, for The Tap a few weeks ago, here’s the link:


Get the book if you want to know more. I have a PDF copy (which I made myself) so ask Mr Tap nicely and he might email it on to you, from me.

We are all to be equal. And that means equally nothing, of the heard, beasts.

On school sports day, there can be no winners.

They don’t want anyone getting any funny ideas!

The truth is that the Reformation and Protestantism was just such a ’funny idea’ – that peoples & nations could, or would dare to, pull away from the power of Rome.

The pope, in an encyclical in 1870, stated that they (Rome) realised that they were in ’extraordinary times’. Protestantism (prōtestārī in Latin means to declare publicly, for the truth), following the Reformation, was what he was talking about. This was the first time the forth-beast power on earth (see the Book of Daniel, Old Testament) had experienced such heresy (which means not being under the control of , or in agreement with, Rome – true independence).

Here’s a pretty good 1 hour film about and Rome, by author dave Hunt:

One Response to “The wealth of The Vatican is our prison”