This came in from a reader.  My first reaction was that it seemed a bit cultish, and not likely to appeal to readers, but then I remembered that when I had my heart rhythm problems, (atrial fibrillation), the bad rhythm was usually triggered by a person walking into the room.  It was as if they had somehow sucked the energy out of my chest, and I was no longer able to control the rhythm of my heart.  I notice that this piece is all about how that process could happen, and how you can learn to stop it. 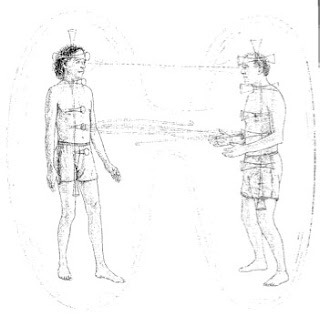 I also had a reiki therapy session after a particularly bad heart episode which had hospitalised me for three days.  The hospital had no solutions.  I was eventually helped by a private doctor working from home who gave me intravenous magnesium, which made me feel that I would live.  The reiki experience was equally dramatic, with my upper body convulsing as the hands passed over.  I had no idea what was going on, but the energy delivered into me bought me time.

Before such experiences I would have had no comprehension or connection with the kind of text below.  In fact I would have more likely ridiculed it, as posted it on a blog.  Now I feel I have some understanding of where this is coming from.

The information I’m about to disclose to you may shock you, may scare you, and may upset you…OR it may LIBERATE YOU….(which is what it is intended to do.)

Last October during our Knights Training in Spokane, we had a small but very powerful group who made quantum leaps personally as well as for the Indigo Nation and the Planet during that time. One of the agendas for the class was to solve problems from members of the Indigo Nation. The subject that came up about an Indigo that had challenges with her 3rd eye being tampered with. One of the Knights in the group responded with “I hate my 3rd eye, it feels creepy to me.” I kind of laughed at the hostile emotion around the subject of the 3rd eye and figured we’d better look into this further. As we discussed this as a group, the Truth began to be unveiled and we started to see the bigger picture of what the chakras REALLY are. The information we got seemed to be extremely radical and no one in the group had ever heard or even thought of such a thing….but it all made too much sense and felt RIGHT. I am about to reveal to you now, “The Secret Behind The Chakras”

Here are pictures of the chakra system from Barbara Brennan’s book, “Hands of Light.” I highly respect her and have been using Barbara’s books for years to illustrate just how these systems work. Barbara is a former NASA Research Scientist and also extremely intuitive. She can “See” energy fields and with her science background, is able to translate that into scientific terms. The pictures below illustrate how she sees our energy fields and I believe that what she sees, is exactly what is there…the manipulated chakra and energy system. NOTE: As of the date this article was written, Barbara was not aware of my views on this subject.

Here is a picture that illustrates how the chakras are used to “Steal energy” or “Vampire Energy” from others.

What we discovered was:

1- The Chakra system is an imposed system that is NOT our natural state. It is a system to compartmentalize our energy for easy access to outsiders and energy vampires. This system has been in place for several Millennia and no one seems to question it, they have just (as I previously did) accepted it…(especially in the New Age Community.)

2- The chakras or “Cones” were placed there so that specific energies could be accessed. This easy access is ideal to control and manipulate our energy fields and minds. They were put there by ET’s that view us as their personal energy source and property.

3- Our original state was to have energy that emits from our “Core” or Sun/Star in the Chest / Solar-Plexus area. Each individual has a slightly different wiring system that runs their energy which is custom designed to them. Personally, I have a triple helix energy system that runs up and down the center of my body and get’s its source from the “Star/Sun” in the center. This triple helix has all the colors and more. When I need a certain energy, instead of accessing one isolated “chakra” energy like the heart or throat, it accesses them all and puts the appropriate balance of energies into what ever is needed (ie throat or voice energy) to handle what is required. This is a much more efficient and synergistic approach to accessing and moving energy. I have only been researching this for 2 months but I have not seen anyone else that had this triple helix so it might be unique to me. Most of the other FW-Indigo Knights that I have scanned have the intense Sun/Star light in their core and it emanates slightly differently than everyone else, like a snow flake. Sometimes the energy can pulse, sometimes it can spiral, sometimes it blasts, it just depends on what is needed or what is requested of it.

4- Our Core or Sun/Star is where our Higher Selves reside…and therefore the statement “God is inside of us, God is within” is literally true. Searching for a God outside of yourself will cause serious challenges. For instance; when you go to a new age meditation class, one of the first things they teach you is to “open your crown and bring the white or golden light down through your body, lighting up each chakra, and then ground into the earth. This may feel good momentarily, but think about what it is that you just did. If your “God” is inside of you, and you bring an “outside energy source” into your body and bypass your own “God” and ignore what was there to begin with……… continue to ignore it and bring in outside energy sources to take its place, what is it going to do? Well, remember the old “use it or lose it” philosophy? Yes, the “Core or God Sun/Star” will start to go dormant and just sit there until you decide to take your will back and use it again. Which energy would you rather be operating from and have command of, your own personal custom designed Authentic Source …or bring in some nebulous energy that could be infiltrated and run that through your body?

I checked everyone in the group for what percentage they were using this system. Most of the group used their chakras very little, only about 2-5% of the time. When I came to one of the Indigos who is a yoga instructor and had an African Shamanist approach to healing, I checked his chakras and found that they were totally shut down. When I told him this he said he was glad that I said that because he knew he did NOT use them and he had his own internal system of energy he ran. He said this validated to him that my scanning was accurate.

After we got more clarity on this covert operation that had been duping us for centuries, we decided to take our power back and do something that felt right …..but was extremely radical. We all got into a star meditation formation (i.e. an Aulmauracite rock between the first and second toe, one in each hand and one at the top of the head as we spread our arms and lets out so we looked like the Di Vinci Man. I put on a meditation CD by Constance Demby – “Novus Magnificat, Through the Stargate,” and cranked the volume up. Each one of us got in our Kryahgenetics egg for added stability and protection and then, in our own way, shut down our chakra systems and eliminated the chakras, (I know, don’t gasp, read on….) and amp-up the Sun/Star at our core.

When I did my own cone removal, this is what happened: I held my rocks, took a deep breath and got into the music. Then I heard a voice say, “Well, you finally figured it out, you have finally COME HOME!” I was kind of embarrassed that it took me so long to “Get It” and it made me laugh inside because it now seemed like such a “No Brainer!” I first shut my chakras down (front and back) and then put a dissolver on all the chakra cones including the ones on all my outer bodies and watched them fade into nothingness. Then I put an amplifier on my Sun/Star and felt it get bigger and bigger and emanate brighter and brighter inside. I felt so safe, so secure, so powerful and so “self contained” it was one of the most exhilarating and liberating experiences I have ever had!

After everyone in the group came out of their meditative transformation state, we sat in a circle and compared notes.
This is what Ann experienced:

“I lay down in the “Star Meditation” position. I closed my eyes and let myself go with the music. I put out the intent to close down and eliminate my chakras. I saw them slowly close and then dissolve into nothingness. I continued in the meditation for a few minutes longer and then all of a sudden, in sync with a drum explosion in the music, I saw and felt a huge Bright Light explode out of the area between my old heart chakra and solar plexus. It was like a nuclear blast….. I sensed a dense wall of protection around me, making me much more impervious to psychic assault.”

“Since doing the chakra shutdown, I can really feel the Power of who I am. I never could tune into my chakras. It always felt like something was off. I always felt the power center at my core and thought there was something wrong with me.”

8 Responses to “Is the energy inside you controlled from outside?”