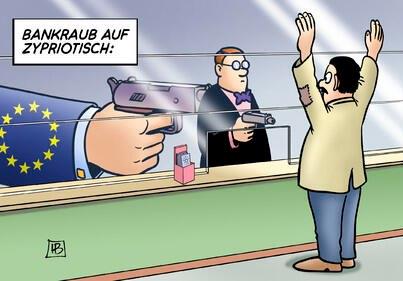 Up to 60,000 British savers face losing thousands each after £8.7billion EU bailout imposes tax on ALL bank accounts in Cyprus

By Simon Watkins and Alex Hawkes
PUBLISHED: 16:23, 16 March 2013 | UPDATED: 22:38, 16 March 2013A spokesman for the Cypriot government said yesterday the agreement with Brussels was ‘serious but not tragic’ and said that the EU had wanted a much higher levy, but the government had fought hard against it.
He said: ‘The dilemma is whether we would have a functioning economy or total collapse on Tuesday… whether to give in at the 6.75 per cent mark or lose 100 per cent.’

Read more: http://www.dailymail.co.uk/news/article-2294388/ATMs-emptied-Cyprus-savers-learn-10billion-euro-bailout-agreement-includes-levy-bank-accounts.html
Over the last few years political and financial leaders in Europe and the United States have implemented policies, regulations and bailouts costing global taxpayers trillions of dollars with the promise that these measures would lead to economic growth and recovery.
What happened in Europe today is yet further proof that nothing they’ve done has fixed the underlying fundamental issues surrounding the events that led to the crash of 2008.
For those who don’t believe the government is prepared to take extreme measures that may include the seizing of retirement accounts, cash savings or even gold, look no further than Cyprus, the latest recipient of bank bailouts.
As of right now, citizens of Cyprus are scrambling to withdraw funds from their bank accounts after the EU, with agreement from the Cypriot government, announced they will decimate funds held in personal bank accounts to the tune of up to 10% of existing deposits.
You read that right.
The European Union has made the determination that the people of Cyprus are now responsible for the hundreds of billions of dollars in bad bets made by their government and bank financiers, and they are moving to confiscate money directly from the bank accounts of every citizen in the country.

Restrictions have been imposed to stop people emptying their accounts or moving their money out the country after the Cypriot government announced that up to ten per cent of deposits will be seized and used to bailout the island’s crisis-hit banking system.
The deal with other eurozone finance ministers is the first time that ordinary citizens’ deposits have been directly raided in this way.
…
One furious expat said: ‘This is plain theft. I’d love to hear someone explain to me why it isn’t.’
…
Under the deal, all bank deposits over €100,000 will be hit with a levy of 9.9 per cent. Those with smaller savings will pay 6.75 per cent.
…
The move sparked panic and violent protests yesterday as crowds desperately tried to withdraw their money at cash machines.
…
‘Why would you risk putting your money in Greek, Spanish or Portuguese banks after this?’
British expats were stunned by the news, with many left high and dry by the restrictions on accounts.
Cash machines had been working, but many ran out of notes because of the panic withdrawals.
…
But financial experts said the raid – designed to stop Cyprus crashing out of the euro, potentially destroying the currency – would send shock waves through the eurozone.
If savers in other troubled nations fear their accounts might be next, they could withdraw their money and spark a catastrophic run on the  banks.
Source: Daily Mail