TAP – Notice two government interventions just prior to this death, and the yet unexplained death of another man in the same locality.  Can you read anything between the lines?  Were not circumstances deliberately brought about which made death a likely outcome for this individual?  That was called murder in my day.

10 Comments  |  Log-in to comment…
Read all comments on this story.

Homesless Daniel Gauntlett died outside this bungalow in Aylesford
by Chris Hunter
A tarpaulin, a pillow, a dirty old jacket, a carrier bag and a few worthless items strewn over the veranda of a boarded-up bungalow.
This is where homeless Daniel Gauntlett tried to find shelter through a bitterly cold winter and where, on a freezing night on Saturday, he finally succumbed to the cold.
Mr Gauntlett, 35, was found the next morning by a passer-by who spotted his body from the pavement.
His belongings still left where he died, residents in Hermitage Lane, Aylesford, reacted with sadness to the news and said Mr Gauntlett had become a familiar sight in the street.

And they said the sadness was compounded by the fact he died outside an empty bungalow due to be bulldozed.
Police had reportedly been called previously after he tried to break into the bungalow. And so Mr Gauntlett, had taken the fatal decision to abide by the law.
Derek Bailey, 80, who lives next door, said Mr Gauntlett had not appeared to be in ill health.
“They took him up to the hospital about a fortnight before when they’d found him and social workers got involved,” said Mr Bailey.
“It was just the bitter weather. I know a lot about cold weather because I was in the Canadian army. I’ve known it drop to minus 70 but the trouble with this country is the dampness.”
Bitter conditions saw snowfall across the county on Saturday night, with temperatures of -2C exacerbated by windchill.
Another resident said: “He was a very nice man apparently. He used to ask for money but not for drink. He used to buy pasties from the supermarket.
“It was so sad. Especially when the houses are empty.”
An inquest was opened and adjourned on yesterday and confirmed the cause of death was hypothermia.
Mr Gauntlett was the second homeless man to die in Aylesford last weekend.
Douglas Poynton, 45, of no fixed address, died at Forstal Cottages in Forstal Road, on Saturday. The precise medical cause of death is yet to be established.
Thursday, February 28 2013 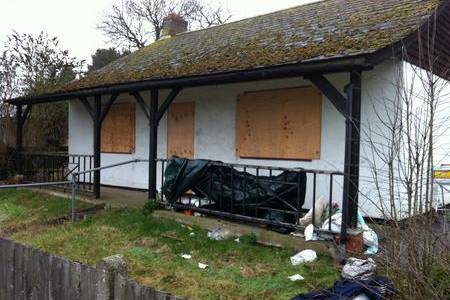 2 Responses to “Are they bumping off homeless single men?”