The Pope Quits Before the Queen Arrives

It certainly looks like the Pope Benedict wanted to be out of  office and out of town before Queen Elizabeth and her husband showed up, in Rome, probably, with her hand out looking for help from her old pal, Benedict. and it may have something to do with the fact that a number of old time global elites are in deep deep trouble as a result of their illegal investments in WATER.

Canadian Prime Minister Stephen Harper and his Justice Minister Rob Nicholson paid a special visit to British Columbiaon Friday, February 8, 2013
The public were told that the purpose of the visit was to announce changes to the laws governing the release of mentally ill people from prisons but, behind the scenes, the administration of justice, in British Columbia and elsewhere in Canada, is under huge pressure due to the exposure of various criminal gangs that have been disclosed to have been operating within the system itself, looting funds, convicting the innocent, and murdering judges and lawyers.

The Secret Take Over Unveiled 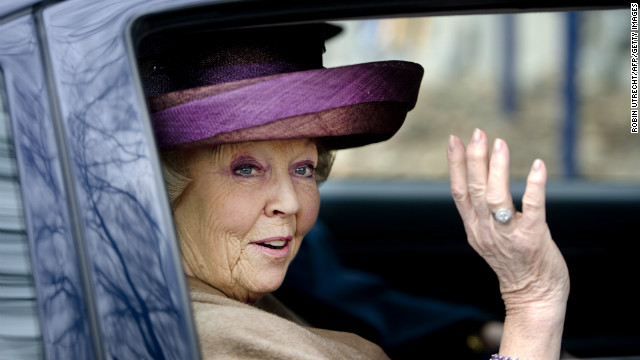 There is emerging evidence that Queen Beatrix, of Holland, who recently announced she would be resigning, was an inside player in the nefarious plot to loot Canada’s fresh water wealth.  There is un-denied evidence that her cousin, Queen Elizabeth, was a party to the scheme but, as yet, there is no evidence that Pope Benedictwho announced he would be stepping down in the face on February 28, 2012, was an investor, although the Vatican through its connections to the Mafia, various Chivalric Orders, and theCIA, was likely aware of the scheme.

A Queen, a Premier and Shipping Company

Some people go to jail based on circumstantial evidence and the Editors admit that evidence against Queen Beatrix, (shown in photo on left) is speculative and, certainly, it is not corroborated by sworn a affidavit like the evidence against Queen Elizabethbut until Canadian Prime Minister Harper and his advisers release the list of global elite investors in W.C.W. Western Canada Water Enterprises Ltd. the question of the role of theDutch Queen remains open
Click here to link to story about Builderberg Club
Former British Columbia Premier Gordon Campbell who covered up the attempt by the international elites to loots the fresh water of British Columbia was invited to a Bilderberg Clubconference in 2010 when Queen Beatrix was in also attendance.

Was this a co-incidence.

A Queen and Two Prime Ministers
and
A Water Scheme

There is un-denied affidavit evidence filed in Canada`s courts thatQueen Elizabeth and her husband Phillip were secret offshore investors in W.C.W. Western Canada Water Enterprises Ltd. along with Canadian Prime Minister Pierre Trudeau.  Naturally the involvement of Trudeau and the Royals was a closely guarded secret because it is a head-chopping-off offence for a monarch to attempt to loot public assets for her personal account.

The monarch, Queen Elizabeth II, was a TRUSTEE of the fresh water in British Columbia which she held for the benefit of the public and not for herself. Trudeau, of course, has an open history of corruption with his fraudulent national energy policy that created Petro Canada and enriched his family and some of his cronies at the same time.

The co-criminals in that deal are hoping Justin Trudeau will get  into power and continue the cover up.

Click here to read more about Pierre Trudeau and water

Click here to read more about Queen Elizabeth and water

In the Editors opinion Canadian Prime Minister Brian Mulroney was either complicit in the strategy or he was the“patsy“ .  The “patsy“ is urban slang for the sucker who gets blamed for the crime while the real criminals walk away.

The Free Trade Agreement with the USA which was the quid pro quo for access to fresh water was the brainchild of Pierre Trudeau and his Minister of Economics Donald MacDonald, who is still alive and working as a lawyer at Lang Michener.  Trudeau sucked in the Queen and her insiders in London into the deal just like he used several Premiers in Canada to assist to implement his oil strategy that enriched his family.

Mulroney, backed by the many of the same people who backed  Trudeau came along and implemented the ideas set up byTrudeau and MacDonald.

6 Responses to “The pope, two queens and the disintegrating water extortion racket”