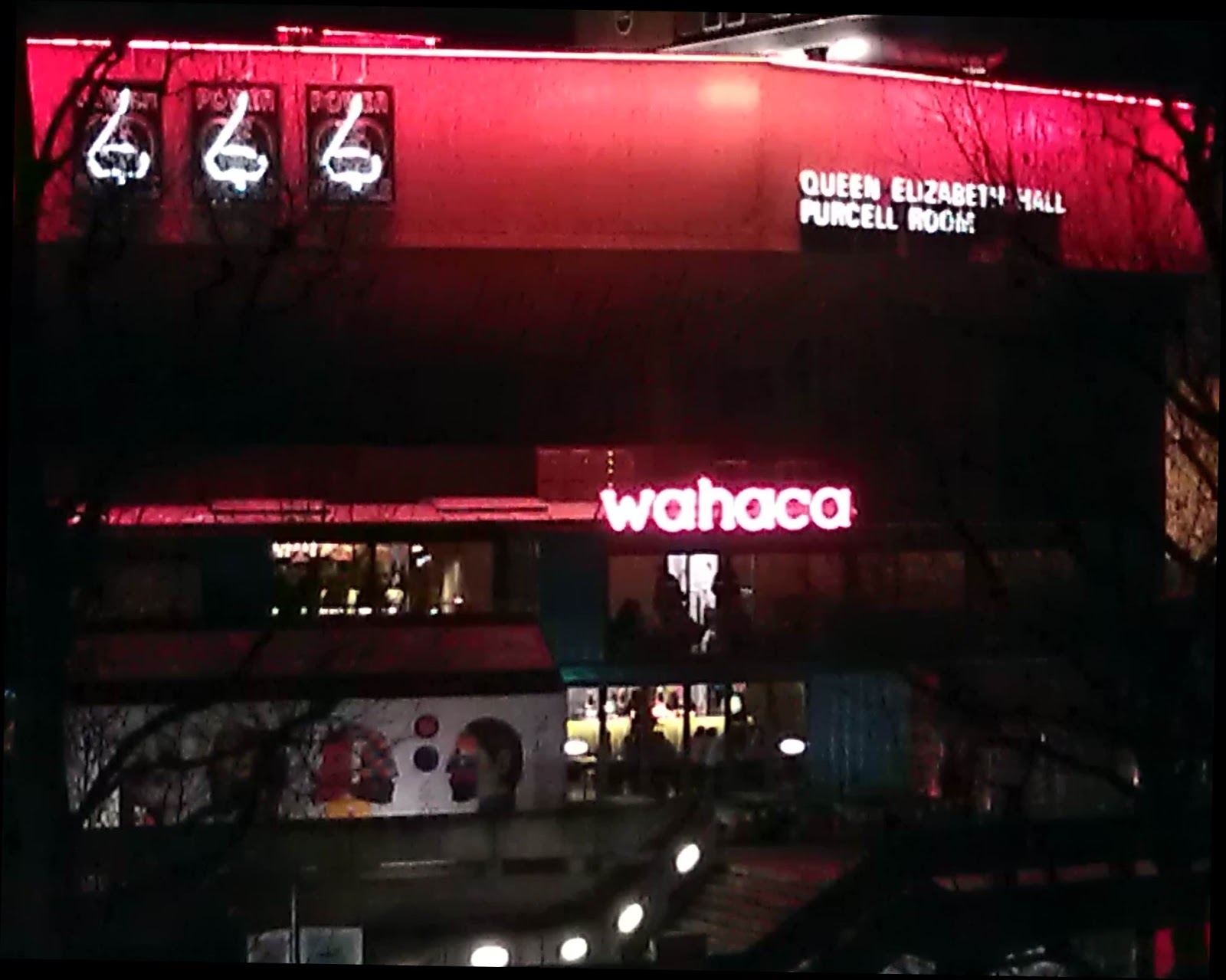 I was walking over Waterloo Bridge last week when I noticed this ‘art installation’ – which is what I think they call these things, nowadays.
It looks to me like a Satanic Fruit Machine !
The three signs flash for a few seconds before stopping on a combination of the three.
There are only three possible displays for each of the three display lights.
1.  Half an apple
2.  ‘POWER TO THE PEOPLE’
3.  ‘6’
Just like a fruit machine, you get a combination of the three, as you can see from the pictures.
This is straight from the occult.  The message to rebel, signified by the apple – the fruit of the Tree of Knowledge of Good and Evil and, of course, the number of the beast 666.
How the serpent, the devil, tempted Eve:
Now the serpent was more subtil than any beast of the field which the Lord God had made. And he said unto the woman, Yea, hath God said, Ye shall not eat of every tree of the garden?  And the woman said unto the serpent, We may eat of the fruit of the trees of the garden:  But of the fruit of the tree which is in the midst of the garden, God hath said, Ye shall not eat of it, neither shall ye touch it, lest ye die.  And the serpent said unto the woman, Ye shall not surely die:  For God doth know that in the day ye eat thereof, then your eyes shall be opened, and ye shall be as gods, knowing good and evil.  And when the woman saw that the tree was good for food, and that it was pleasant to the eyes, and a tree to be desired to make one wise, she took of the fruit thereof, and did eat, and gave also unto her husband with her; and he did eat.
Genesis 3, 1 – 3;  Authorised Version, 1611 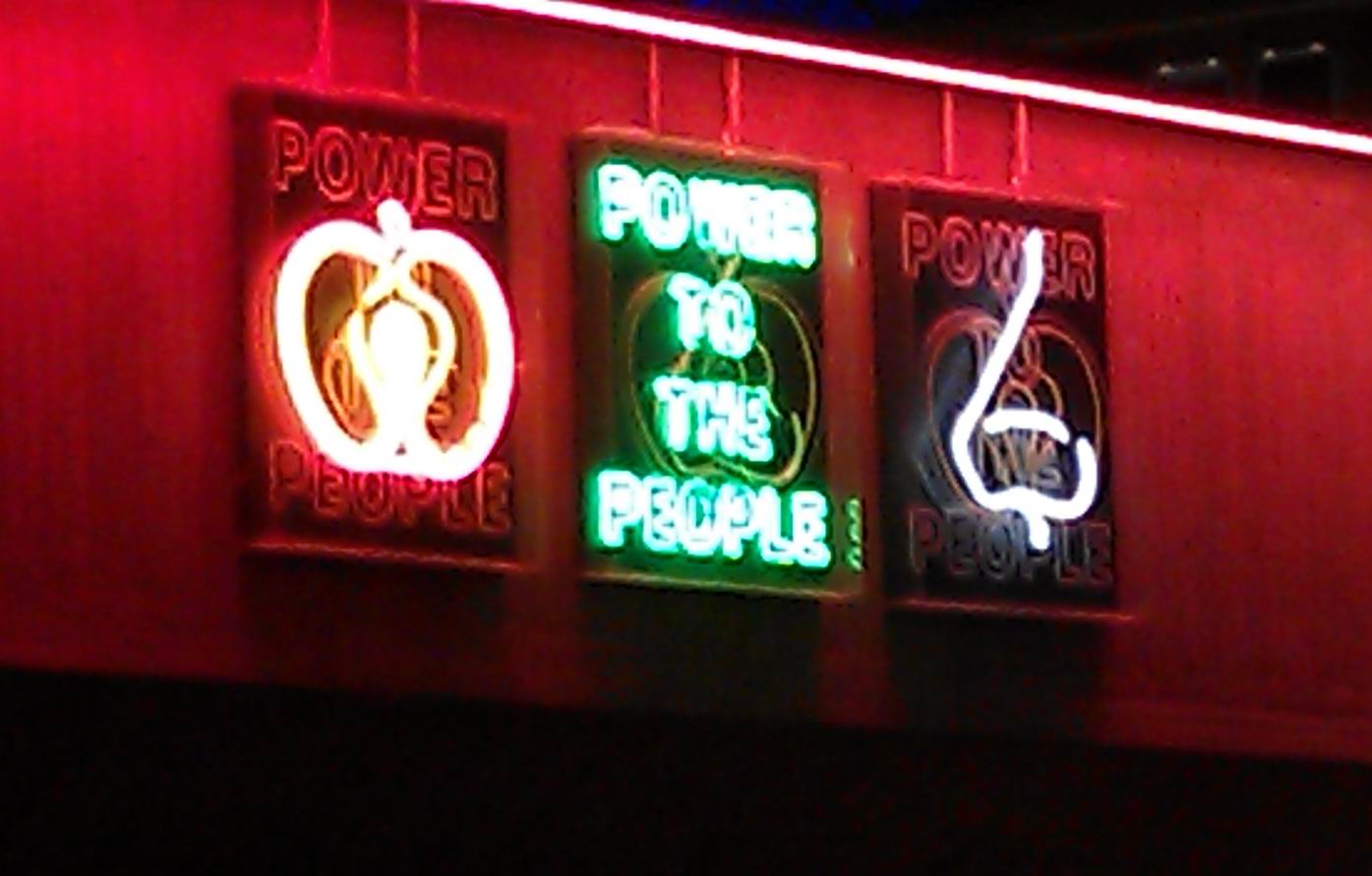 Satan, the deceiver, questioned whether disobeying God was a sin or not “did God really say..?”, thereby questioning accepted morality.
The serpent denied there was any danger in abandoning accepted morality “you will not surely die”.
The serpent also suggested much advantage in was to be gained in committing this act of rebellion “ye shall be as Gods”.
This is the message, and the meaning, of this piece of public art.  Promotion of the Luciferian doctrine – really the key teachings of the Mystery Religions of ancient Egypt & Babylon, all secret societies and the New Age movement.
If you’re not a Christian or even familiar with the story of the Fall of Man in the Garden of Eden – but you are interested in the world in which we live and the powers that in control everything – then maybe you should familiarise yourself with the Holy Bible, because these powers literally preach and practice the complete opposite of Christian doctrine – to the letter.
If you wish to investigate further, you will find that spirits / demons, when they are contacted, also preach and teach exactly this Luciferian philosophy.
‘Aliens’ also fall into this category.  They are the demons of old.  Any rational, objective investigation into the UFO phenomenon and human contact with these so-called ‘extraterrestrial’, beings will show that they are extra-dimensional beings, very closely linked to and interested in humans.  They are definitely NOT beings from other planets.
(see books by Jaques Vallie and John Mack, whose documentaries are on you tube.  I get tired of pointing people towards this evidence.  Some desperately want to believe the E.T myth, pushed by TPTB.  That very fact that they want you to believe, should make those question this far more thoroughly.)
The lies of the serpent, first spoken to Eve in the Garden of Eden, are repeated constantly by New Age occultists.  The first is that there is no such thing as death (you will surely not die) only reincarnation.  This lie is constantly pushed by the New Age movement; also that there is no danger in disobeying God and denying the reality of sin and a recognition of right from wrong; and that there is much advantage to be had from doing so (ye shall be as Gods).
Occult writers like Albert Pike, the most highly revered Freemason of the 19th century (see his most infamous work entitled Morals and Dogma, published 1871) writes of Lucifer:
“Yes, Lucifer is God…and the true and pure philosophic religion is the belief in Lucifer…you may repeat it to the Brethren of the 32nd, 31st, and 30th degrees: The Masonic religion should be…maintained in the purity of the Luciferian doctrine.”
====
Helena Petrovna Blavatsky the ‘High Priestess’ and originator of the Theosophical Society, writes in The Secret Doctrine (1888):
“It is Satan who is the God of our planet and the only God.” pages 215, 216, 220, 245, 255, 533, (VI)
(Please note the name of the character from the Harry Potter books, Cassandra Vablatsky.  This is not coincidental)
====
“This serpent, Satan, is not the enemy of man, but he who made gods of our race”
Aleister Crowley
====
Here’s a very telling quote from a very high-up New Age disciple, Barbara Marx-Hubbard; co-founder of the World Future Society, who also ran to be selected as the vice-presidential candidate for the Democratic Party in 1984 – a very wealthy, influential and important women:
“The choice is, do you wish to become a natural Christ, a universal human [‘ye shall be as Gods’] or do you wish to die?  People will either change or die.  That is the choice.”
Barbara Marx-Hubbard, from her book ‘Happy Birthday Planet Earth’ (1986)
====
They also preach, practice and teach that there is no right from wrong, no sin.  Do you recognise this today in the form of ‘moral relativism’? i.e. there are different ‘truths’ for different people and that they all are valid?
We instinctively know right from wrong, we have a degree of innate morality – yet TPTB, the powers of this world want us to ignore what we know to be right and glorify and follow what we know to be wrong.   They promote the inversion of morality.  This is why Satanists use an inverted crucifix, because this represents the inversion of right and wrong, the inversion of all accepted morality.
The endless promotion of this doctrine is why the world is becoming increasingly immoral & amoral.  What about the article on The Tap last week about paedophilia being redefined as something other than just plain wrong – and then those that disagree being labelled as something like ‘paedophileophobes’? (I’ve think just invented that word)
Their argument is that ‘paedophiles are just different to you, that’s all.  Their ‘truth’, their morality, what they believe to be right and wrong is different to yours, that’s all – so, don’t be so intolerant…you bloody Nazi.’
Everything must be tolerated.  The only thing that cannot be tolerated is intolerance.
In the future, there will be no right and wrong, no recognisable, universal moral framework – the Goym will all be, morally, completely lost – just tumbling in the void !   People won’t know which way is up or down, left of right.
Mission (almost) accomplished, I would say, looking at the Western world today.  And who do they wish to indoctrinate most of all?  Children and teenagers.  Pop music and pop-music videos, sex and violence filled Hollywood films, teen magazines, murderous computer games, inappropriate clothing for pre-teenage children, books and films promoting witchcraft, etc.
As Aleister Crowley said, ‘Do what thou wilt, that is the whole of the law.’  This was the spirit of the 1960’s.  Crowley has been called the unsung hero of the 1960’s.
TPTB are now becoming so blatant in promoting their amoral, immoral, no-morals, smash everything, rebel & destroy doctrine. POWER TO THE PEOPLE !   FREEDOM !
To quote Janis Joplin, ‘Freedom’s just another word for nothing left to lose’
When the pied-pipers of the New Age fully have their way, that’s exactly what people will have.  Nothing.
Scotty

TAP – Genesis says ‘you will be as Gods (plural)’.   That is the problem with taking the bible of confirmation of monotheism.  It writes of Gods and not of one God.  The idea of one God was introduced at Babylon by Marduk.  He was praised in Egypt as Amen.  Before that time, it was well known throughout the ancient world, even by the writers of the bible that there was a pantheon of gods all competing for power with each other.

I follow the logic of ‘who created the gods?’ who were advanced beings from planets ahead of our own.  But to try to run the formula that aliens are merely demons is pushing it, in my opinion.

Some 445,000 years ago, astronauts from another planet came to Earth in search of gold.

Splashing down in one of Earth’s seas, they waded ashore and established Eridu – Home In The Faraway (TAP – Eridu – the same word as Earth).  In time the initial settlement expanded to a full-fledged Mission Earth – with a Mission Control Center, a spaceport, mining operations and even a way station on Mars.

TAP – nothing in the Sitchin story conflicts with The Old Testament explanations, which were simplifications of the full history.  These appeared in much greater detail  in the last fifty years as people worked out how to translate Sumerian and Akkadian cuneiform, and read the ancient clay tablets discovered across the Middle East over the previous two hundred years.  There may well be a single God at the centre of the universe, but you won’t find him by denying the history of who we are, and who put us here.

There are many other sources to point out intelligent entities within our solar system like Norman Bergrun who analyzed the Voyager pictures of Saturn’s rings.  These various sources can’t all be a single hoax assembled by the Masons, or TPTB.  At some point you have to start working from the premise that we are not alone, and never have been.   Mankind’s history is very different to everything we have been taught.

JULIA –  When I decode the story of Jesus, I find that he was teaching chakra to people, even the churches are laid out to reflect the body of Jesus, with his navel, the trancepts (arms or wings), and the purple altar (alter) perfectly matching the crown chakra. If you decode Jesus death, you get the same sort of story, with Jesus liking healing herbs and berries (holy thorn around is crown chakra), and the nails going in at his Chi energy points. See my blog SuliWrites.wordpress.com for me. Search for Jesus da Vinci and Chakra, or Decoding the Murder of Jesus. Sorry I can’t seem to do links on comments any more.

Jesus said to look within yourself.

See my post The Saviour Within. I think there is much good stuff in the Bible, but you have to filter it your own way, and not rely on the controlling religions to interpret it for you, thus limiting what you allowed to think.

The picture of the apple looks like the vulva to me, particularly as it is red. We are subliminally being targeted with this all the time. People are producing art with this sort of stuff because it is in the global consciousness. Even Snowmen are becoming Satanic. Kids are making them with big black eyes, and grim mouth, or blood dripping down them. Gothic snowmen! This is just kids reacting to what’s happening to them.

Apologies for mistakes in any of the above, it’s very difficult to edit, so any mistakes get stuck in place! They are making it harder and harder to comment.